On one flank at the Bernabeu stood Cristiano Ronaldo. Opposite him stood Jose Antonio Reyes. Ronaldo was wearing the white of Real Madrid. Reyes donned the red and white stripes of Atletico, but as the Madrid derby progressed on Sunday night, it became increasingly difficult to shake off the feeling that he also should have been decked out in Real’s colours. Although both Ronaldo and Reyes were once regarded as two of the brightest young talents in English football, their careers have veered off wildly in opposite directions.

The descent of Reyes from arguably the best player at Arsenal and in the country, for a limited time only admittedly, to an occasionally gripping performer for a middling club is one of the more puzzling and troubling tales of recent times. For a brief, carefree few months at the start of the 2004-05 season, Reyes was awesome. He was unplayable. He was unique. A giddy frisson was palpable in the air whenever he took to the pitch. The only player who attracted as much praise was Wayne Rooney, and anyway he was out with a broken foot. 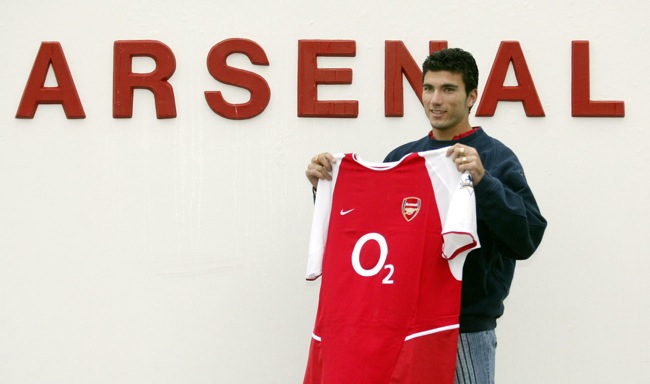 Reyes joined Arsenal in 2004. He was hyped by everyone, including Zinedine Zidane

Some even suggested he eclipsed Thierry Henry. Maybe. He was certainly far superior to Ronaldo, and doesn’t that sound ridiculous now? Strange as it was, Ronaldo was regarded as a bit of a show pony, all style and no substance. Reyes was the real deal, the one with the end product, emerging as the star man in the best side in the country, Arsenal, who had won the league without losing a game in the previous season.

Ronaldo’s Manchester United finished an astonishing 15 points behind them, and there appeared to be more chance of a sophisticated evening at the opera with Andy Carroll than of them closing the gap. And we all know what’s happened since then: United won three league titles in a row and the Champions League, with Ronaldo being named the best player in the world in 2008 and earning an £80m move to Real Madrid in 2009. In the meantime, Reyes became the forgotten man.

In an article for the Guardian, published in September 2004, Rob Smyth wrote: “At their best they [Arsenal] have an extraordinary, unprecedented fluidity, and in the remarkable Jose Reyes they have acquired a man with the ability to play each game in a bubble; regardless of their significance, he can take them to another level, because he appears unafflicted by the choking pressure that does for Henry.” With the benefit of hindsight, it is easy to dissect that line with surgical precision, but that would do both Reyes and Smyth a disservice. At the time of writing, no one would have disagreed with those sentiments; not me, not you … ok, maybe Thierry Henry.

Reyes had arrived at Arsenal in January 2004 armed with an intimidating reputation. Signed for a fee that potentially could have reached £17m – a record for Arsenal – he had first caught the eye with an evisceration of Real Madrid while at Sevilla. His pace and skill compelled Zinedine Zidane to ask him if he was “playing on an invisible motorcycle”. Praise doesn’t come much higher than that. Arsene Wenger was surely on to a winner here. Reyes made his debut for Arsenal as a late substitute against Manchester City. He missed a couple of decent chances but his big day was ultimately overshadowed by a wonderful winner from Henry, a theme that would eventually come to define Reyes’s career in north London.

Fittingly enough, Reyes’s first decisive contribution in an Arsenal shirt came in the absence of Henry. In February 2004, Arsenal hosted their title rivals, Chelsea, in the fifth round of the FA Cup. Adrian Mutu had given Chelsea the lead, one they held with relative ease until Reyes popped up in the second half. First he cut inside from the right flank and hammered a ferocious shot into Carlo Cudicini’s top corner. Moments later a piercing pass from Patrick Vieira sliced open the Chelsea defence, and Reyes beat Cudicini with a first-time shot.

He had truly arrived, although his role in Arsenal’s ‘Invincibles’ vintage was miniscule, mainly due to the immense quality and experience of a squad that was already firmly established. As both a newcomer to the country and a youngster, Reyes was mostly kept in the wings.

Patiently he waited for a proper opportunity and at the start of the 2004-05 season he was named in the side ahead of Robert Pires. Having been given a chance by Wenger, Reyes began the season with a remarkable intensity, scoring six goals in Arsenal’s first six games, and creating many more. He was perfectly suited to a wonderful Arsenal side: capable of playing on either wing or up front, he possessed speed of mind and body and a sublime left foot. He was tricky, inventive, confident in front of goal and if he zoomed past a defender, there was no catching him. At the start of October, Reyes scored in a 4-0 victory over Charlton Athletic (and laid on the pass for Henry to score with a sumptuous backheel). At this point Arsenal were being hailed as the greatest ever side in the history of English football. Reyes was the man. Except that was the problem. He wasn’t. He was still a boy, vulnerable, open to attack and prone to the vicissitudes of growing up. Nor did it help that he was homesick and about to experience the bitterness of an English winter. 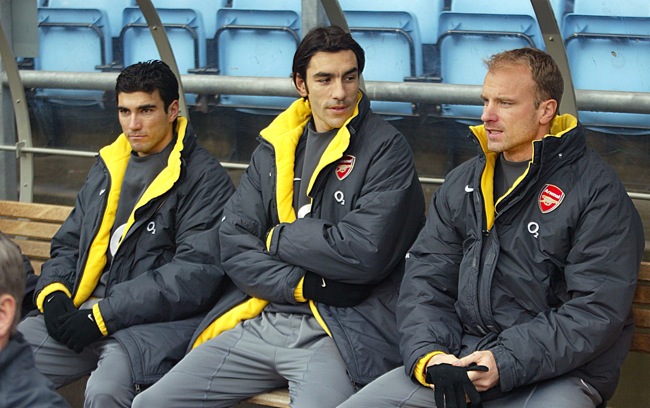 Jose Reyes the outsider: The Spaniard never truly felt at home at Arsenal

The goal against Charlton was his last until December, when he scored against Rosenborg in the Champions League. His next league goal was on Valentine’s Day in 2005. After that, he managed two more. After an explosive start, Reyes went out with about as much of a bang as a faulty Christmas cracker.

Some youngsters lose their way when they are sidetracked by alcohol, girls and partying. Others fatally believe their own hype and stand still. Some get into scrapes with the law. Others are wrecked by injury. Yet none of these issues applies to Reyes. So what’s his excuse?

Many will point to the infamous game between United and Arsenal, who were trying to make it 50 games unbeaten, in October 2004. Identifying Reyes as Arsenal’s biggest threat, Gary and Phil Neville set about ruthlessly kicking him out of the game. It was blatant, outrageous and vicious. It also worked. The referee did nothing. Reyes did even less, and Manchester United won 2-0. There is a clip of Reyes cheekily nutmegging Gary Neville on the halfway line and racing away from him, only to be brutally hacked down. Scandalously neither Neville was sent off, and eventually the only player who left the pitch was the shell-shocked Reyes, substituted for his own good after 70 minutes. This is perhaps the critical moment of his time at Arsenal, the moment when it crystallised that maybe English football wasn’t for him. But it’s not the key moment in his career. No match, no matter how much of a mark it left on you (and Reyes had loads, the Nevilles made sure of that), can be that definitive.

This was only the start of an extended period of self-sabotage for Reyes. Before a friendly against England in November 2004, he became involved in a racism scandal when Spain’s coach, Luis Aragones, told him: “Tell that negro de mierda [black s**t] that you are much better than him. Tell him from me. You have to believe in yourself; you’re better than that negro de mierda.” Aragones, of course, was talking about Henry, the King of Highbury. Come at the king and you’d better not miss. Suddenly Reyes found himself in a very awkward place.

Matters only deteriorated from there. The following February he was caught out by a prank call on Spanish radio. Thinking he was talking to Real Madrid’s sporting director, Emilio Butragueno, Reyes begged to be taken to the Bernabeu. Suffice to say that didn’t go down well at Arsenal. He had failed to settle in London, struggled with the language and was desperately homesick. So obvious was it that he wanted to leave, he would have hammered the nails into his own coffin, but he was so woefully out of form he probably would have missed anyway. 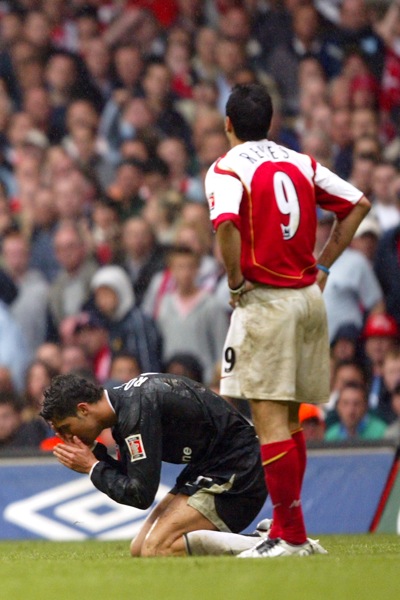 Reyes, about to be sent off for a challenge on Ronaldo, in the 2005 FA Cup final

The final indignity of a bewilderingly dismal season came in the FA Cup final against United. By now Reyes had been exposed as the show pony and Ronaldo was the thoroughbred, a feeling enforced by this match. In a final that United dominated and somehow lost on penalties, Ronaldo was the best player on the pitch. Reyes was an irrelevance and was eventually sent off in the last minute of extra time for a crude lunge on Ronaldo. Their roles had well and truly been reversed. Strangely, though, Reyes did not leave in that summer and managed one more inconsistent season at Arsenal. Thankfully for all concerned, in the summer of 2006, he got his move back to Spain when Real Madrid signed him.

Now here’s where the story turns weird. On the basis that Reyes’s lack of form could be put down to a loss of confidence, the Neville brothers putting the frighteners on him and his chronic homesickness, moving back to Spain ought to have been the springboard for him to regain his composure. It simply didn’t happen though. He had one season at Real, under Fabio Capello, who didn’t appear to fancy him too much. Even though he scored the goals against Mallorca on the final day of the season that brought the La Liga title to the Bernabeu, he had still flattered to deceive. 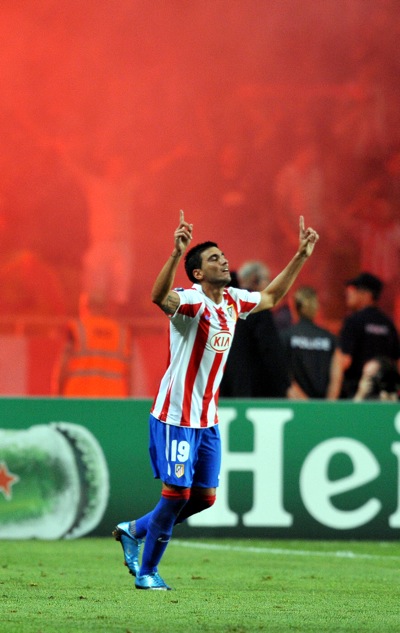 Reyes joined Atletico in the summer of 2007. His first season there was a farce as he failed to score a single league goal, and ended up farmed out on loan to Benfica, where he spent the 2008-09 season. Last season was better for him: he finally regained some of his mojo, and helped Atletico to victory in the Europa League and the Copa del Rey. In any other year, that would have been more than enough. But this was a World Cup year. And Reyes wasn’t involved. And Spain brought home the biggest prize of them all. This is Reyes’s lot: brilliant, unlucky and tragic in equal measure. The one resigned to watching his mates get the job, the glory and the girl, accepting each cruel twist of fate with a weary, stoic smile.

No one particularly shone in Sunday’s Madrid derby. Real’s attack of Ronaldo, Angel Di Maria, Gonzalo Higuain and Mesut Ozil flickered here and there but was rarely devastating. In a disappointingly drab match, Reyes was the most impressive forward on show, also eclipsing his Atletico team-mates, Diego Forlan and Sergio Aguero. Stationed on the right, he regularly left his marker, Marcelo, floundering, escaping him with consummate ease on more than one occasion. His crosses were delivered with a menacing flourish, and only the intervention of Iker Casillas prevented Forlan from scoring from one centre. Twice Reyes nearly reprised that first goal for Arsenal, the stunner against Chelsea: Casillas brilliantly saved his first effort and the second fizzed over the angle of post and bar. Close, but not close enough. The story of my life, Reyes might have reflected afterwards.

A Glorious Education in Italian Football