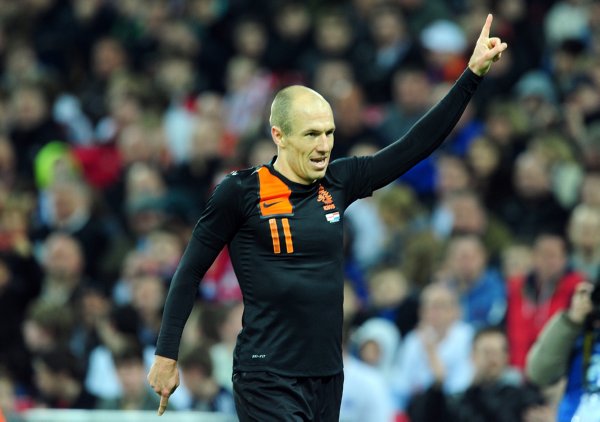 1. A well-oiled and largely established Holland side with a smattering of sporadically world class players beat a pedestrian England side with approximately none. Once again, it became very apparent early on last night that England’s only means of scoring at Euro 2012 will be set pieces and corners. Oi! FA! Get on the phone to Grant Holt.

2. Arjen Robben is one hell of a player when he fancies it.

3. Passing the ball around the back four for ten unencumbered minutes while your opponents wait for you to make some kind of meaningful progress does not equate to calm, consummate ball use.

4. Danny Welbeck is not up to leading an international line on his lonesome. While we’re on the subject – he may well have been tired/tweaked a hamstring early on, but Steven Gerrard was pap. Also, Ashley Young is a mimsy.

5. The most disturbing mental image of the night? It was a toss up between Scott Parker screaming after having his nads nudged by an unfortunately placed pitchside microphone and this; the moment Klaas-Jan Huntelaar went grass-to-mouth in front of 76,000 people… 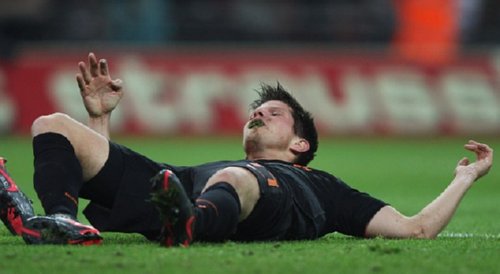 6. Seriously though, the collision in the build up to Huntelaar’s goal was enough to turn the stomach. The Dutch striker cracked skulls with Chris Smalling and both were left lying sparko doolally on the turf. After five minutes spent stemming the claret, both players were subbed off; Huntelaar just about under his own steam, Smalling motionless on a stretcher. Thankfully the word is positive. Huntelaar ‘only’ suffered a busted conk and mild concussion while Smalling has been discharged from hospital after having stitches in a “very bad gash.”

7. Rather than admonishing the England defence for Holland’s first goal, can’t we just put it down to a great attacking move. Parker was a non-entity as Robben hurtled past him through the midfield but it was no-one’s fault – just a clever run from Huntelaar to pull three defenders with him and lightning pace and a lethal finish from Robben. Well played Holland.

8. Klaas-Jan Huntelaar contributed more in the space of three minutes for Holland than any of England’s strikers managed over the course of the entire night.

9. I’m 95% sure that Joe Hart’s flailing arm would’ve swatted Robben’s third goal clear had the shot not deflected off Gary Cahill’s back. Cruel twist of the knife after England had undeservingly managed to salvage the scoreline.

10. England’s two goals were impressive finishes, but they had a definite whiff of ‘training goals’ about them – they just seemed a little too easy. Holland definitely began easing off as the game wore on, but still managed one last flick of the switch to seal the win. You could replay that game 100 times and the Dutch would’ve won 85+ of them one way or another.

11. The ‘raises more questions than answers’ line trotted out after every single England friendly without fail is Grade A bulltwaddle. They’re dull, less than the sum of their parts and incapable of spontaneous creativity. Have been for years. It’s the unwavering expectancy of the English that’s the real killer.