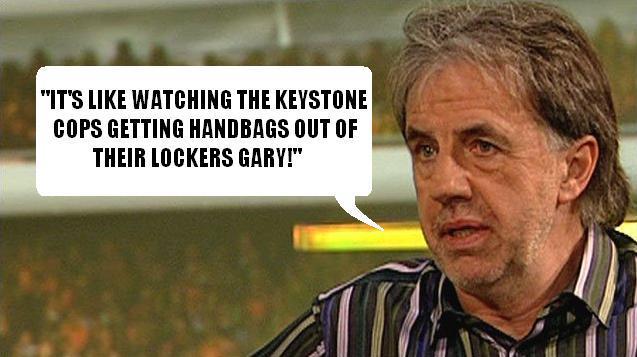 1. “A real Keystone Cops moment” – We’re starting with a real pet hate here. Has anyone actually seen this movie or even so much as heard it referred to outside of the MotD studio? Is it anything like Beverley Hills Ninja?

2. “He’s always got that in his locker” – I believe this was first coined to describe Stan Lazaridis’ happy knack of being able to thunder a wicked shot 30cm over the crossbar once a season, every season between 1998-2003.

3. “All just a bit of handbags there” – Please, please someone think of some other way to describe footballers’ poncey ‘no touching of the face or hair’ forehead-nuzzling. How about ‘that was all just a bit of vainglorious impotent cock-frottage there’?

6. “Your Tottenhams, your Arsenals, your Chelseas…” – Seizure-inducing pluralisation beloved by the likes of your Redknapps, your Townsends. It/they must be culled.

7. “He’s a football man/loves his football” – Well he’s in the right f**king line of work then isn’t he?

8. “Cultured left foot” – Science has shown that it’s humanly impossible to have a ‘cultured right foot’. There is no such thing. It’s also worth noting that only the left foot can be deemed ‘trusty’ – again, a characteristic as yet scientifically inapplicable to the right, though research is ongoing.

10. “Meat and drink” – A stone-cold Keown classic: used to describe something routine and tawdry. Like Martin Keown.

11. “No-one gambled” – Or, more likely, the cross was aimless and over-hit. Crossing is a difficult skill that should be given more credence, though it’s routinely cheapened on a game-to-game basis. Apropos to that, careening an Exocet down the ‘corridor of uncertainty’ does not necessarily a good cross maketh.

13. “Little man with a big heart” – Reserved solely for hairy little gobshites like Gattuso and co.

15. “He’s got to be hitting the target from there” – Time to address a worrying scourge that is beginning to take root in commentary gantries across the country.

A fair few Sunday afternoons ago I sat through Middlesbrough vs Leeds on the BBC. Luciano Becchio – ten yards out with the ball dropping out of the sun fromdirectly behind him, over his shoulder and far too close to his body for him to do anything meaningful with – managed a reasonable connection but no direction on his volleyed shot and it whistled clear over the bar by a good few feet.

Cue Beeb gab-jockey Guy Mowbray: “He’s GOT to be hitting the target from there, hasn’t he?” to which Martin Keown brayed in agreement – possibly muttering ‘meat and drink’ under his breath.

And it’s beginning to happen with worrying regularity. Not a missed chance goes by without the question being asked by some puke behind a microphone. Guaranteed it’ll happen at least three or four times every MotD. Commentators, with no real grasp of the actual mechanics of the task at hand, pointing out what the professional footballers should’ve done during slow-motion replays. Hindsight and retrospect in perfect sordid unison.

Jim Beglin and Mark Bright are sods for it. In fact, it seems to be the only thing he’s got going on in the way of analysis: “Could he have just hit it a little earlier/taken a touch/made the ‘keeper work/picked out the top corner from 30 yards?”

It’s oh so easy to do and I’ll be damned if it qualifies as insight.

Any we’ve missed? You know what to do people…