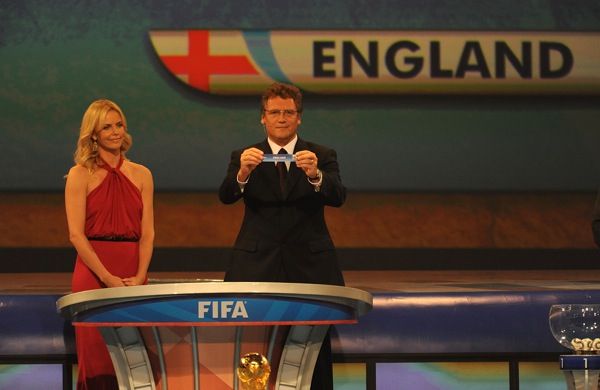 1. Charlize Theron won’t be invited back by Fifa anytime soon. What was she on – a mixture of valium and gin? She looked great and flirted with everyone on the stage, but boy did she talk a lot of shit.

2. David Beckham’s haircut will be great when it’s finished.

3. Haile Gebrselassie is tiny, like an Action Man, but happier.

4. Crappy draw for Africa. Ivory Coast – Africa’s best team – must find a way to get one good result from games against Brazil and Portugal, while Ghana are stuck with two very strong European nations – Germany and Serbia – plus the plucky Australians. For hosts South Africa too, the draw was unkind – France and Mexico stand in their way, and there’s a good chance Bafana Bafana won’t escape from their group, which would be bad news all round for the tournament. Nigeria might be the African team to watch instead, as I expect them to qualify alongside Argentina at the expense of South Korea and Greece. Overall though, not good for the home continent.

5. Good draw for England, even better draw for the USA. Fabio Capello will be confident that his team can win its group, but the real winners are the States, who got as good a draw as they could have hoped for (they drew three of the weakest teams in their respective pots) – and about time too. If Fifa wanted to contrive helpful conditions for its most important expanding market, Sepp just got his wish. There’s every chance Landon, T-Ho and co. can win what must be one of the weakest World Cup groups in recent times.

6. There is no authentic Group of Death. On second glance, most of the groups look very competitive and well-balanced. I don’t see a stand-out GoD, although Portugal and Ivory Coast won’t be happy to be in the same quartet as Brazil.

7. D is for Deepest. Germany, Serbia, Ghana, Australia. That’s one deep group: everyone can beat everyone else. Your head tells you it’ll be Germany +1, but the Germans will rightly be nervous about the prospect of an early exit. Still, I’d probably take Germany and Ghana to qualify here, but Serbia and the Aussies will fight to the end. A fascinating quartet, whatever happens.

8. Europe 1-0 The Rest of the World. Italy, Spain, Holland and England all got sweet groups. Now I wouldn’t bet against six European nations making it to the last eight, which would rather turn the tournament into Euro 2010. Shame if that happens. Would love to see some new teams go far, like Chile for example, who looked very tasty in their qualifiers.

9. Long-range prediction, based on the draw: Spain to beat England in the final.

10. I’m excited. Very excited – six months is too long to wait though, and way too many “England can roar to victory” headlines to endure, not to mention metatarsal injuries.

What did you make of it all? Thoughts please…