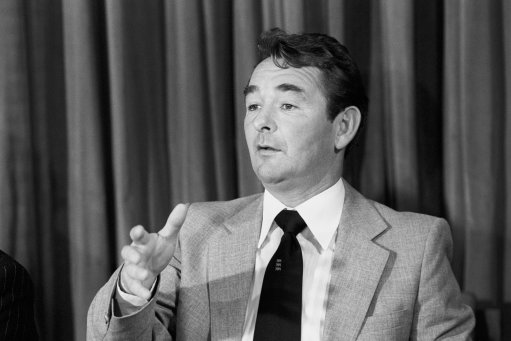 We can’t let a mention of Old Big ‘Ead pass without having a gander at some of his finest orations over the years. Ever the gobby sod, Cloughie certainly had a raconteur’s way with a quip or a barb, with his pithy, often withering one-liners coming to define his cantankerous, razor sharp and focused personality before it all started going tits up.

1. “Rome wasn’t built in a day, but then again I wasn’t on that particular job.”

2. On dealing with player disagreements: “We talk about it for 20 minutes and then we decide I was right.”

3. “David Seaman is a handsome young man but he spends too much time looking in his mirror rather than at the ball. You can’t keep goal with hair like that.”

4. On aerial football: “If God had wanted us to play football in the clouds, he’d have put grass up there.”

5. On the late Peter Taylor: “I’ve missed him. He used to make me laugh. He was the best diffuser of a situation I have ever known. I hope he’s alright.”

6. On Martin O’Neil’s success at Leicester City: “Anybody who can do anything in Leicester other than knit a jumper has got to be a genius. If he’d been English or Swedish, he’d have walked the England job.”

7. On Manchester United ducking out of the FA Cup to go and play in the 1999 World Club Championship: “United in Brazil? I hope they all get bloody diarrhea.”

8. On Sven getting the England job: “At last we’ve appointed a manager who speaks English better than the players.”

9. After a streaker interrupted Derby’s game against Man Utd: “The Derby players saw more of his balls than the one they’re meant to be playing with!”

10. “The ugliest player I ever signed was Kenny Burns.”

11. On Eric Cantona’s infamous kung-fu kick at Selhurst Park: “I’d have cut his balls off.”

12. “I’m sure the England selectors thought if they took me on and gave me the job, I’d want to run the show. They were shrewd because that’s exactly what I would have done”

13. “If a chairman sacks the manager he initially appointed, he should go as well.”

14. On his biggest career regret: “Telling the entire world and his dog how good a manager I was. I knew I was the best but I should have said nowt and kept the pressure off ‘cos they’d have worked it out for themselves.”

16. “We used to go to the pictures every Saturday night but we had to leave a little bit early and get home and watch Match of the Day. My wife still complains she missed the last five minutes of every film we saw.”

18. On the new offside rule: “If any one of my players isn’t interfering with play, they’re not getting paid”

19. To the Forest physio after Stuart Pearce suffered a concussion in an FA Cup game: “Tell him he’s Pele and that he’s playing up front for the last 10 minutes.”

20. After Martin O’Neil asked why he’d been dropped to the reserves: “Because you’re too good for the first team.”

22. On guessing who nominated him for a knighthood: “I thought it was my next-door neighbour because I think she felt that if I got something like that I would have to move.”

24. On pasty Forest midfielder Brian Rice: “I’m not saying he’s pale and thin, but the maid in our hotel room pulled back the sheets and remade the bed without realising he was still in it!”

26. “Telling a player to get his hair cut counts as coaching as far as I’m concerned.”

27. “Meeting my wife Barbara was the best thing I ever did.”

28. On meeting new signing Teddy Sheringham: “I’m calling you Edward because that’s what it says on your birth certificate.”

29. “I wouldn’t say I was the best manager in the business…but I was in the top one.”

30. “I want no epitaphs of profound history and all that type of thing. I contributed. I would hope they would say that, and I would hope somebody liked me.”

12 Brilliant Photos of Cloughie In His Pomp