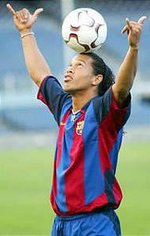 Forbes has just released its list of the top ten best-paid footballers in the world. The list runs as follows:
1 Ronaldinho (Barcelona)
Total earning: Â£16m
The toothy Brazilian has overtaken David Beckham as football’s top earner.
2 David Beckham (Real Madrid)
Total earning: Â£15.8m
It’s been a long time since Becks occupied anything other than the top spot, but his mega-deal with the LA Galaxy should see him regain the top spot next year.

3 Ronaldo (AC Milan)
Total earning: Â£12.7m
His star is on the wane, but the second toothy Brazilian on this list is still a genuine superstar.
4 Wayne Rooney (Man Utd)
Total earning: Â£9.3m
Rooney will never have the broad appeal of a star like Beckham, but neither will he go short of a bob.
5 Michael Ballack (Chelsea)
Total earning: Â£9.1m
If it somehow seems unfair that Ballack earns this much money, that’s beacuse yes, it is unfair.

7 Zinedine Zidane (retired)
Total earning: Â£8.5m
Earning power has diminished but that headbutt will ensure that he remains in the spotlight for a while, even now that he has reitred from playing.
8 Fabio Cannavaro (Real Madrid)
Total earning: Â£7.9m
The man who lifted the World Cup in 2006 is one of only two defenders on this list.

9 John Terry (Chelsea)
Total earning: Â£7.7m
Pies was a little surprised to see Terry make this list, but then he is the England captain so his earning power is not limited to Chelsea.
10 Steven Gerrard (Liverpool)
Total earning: Â£7.7m
According to Forbes, Stevie G earns marginally less per year than John Terry. Must be hard to get by on just Â£7m a year.
[Via Forbes]