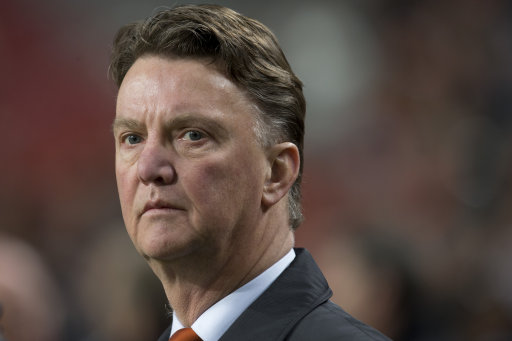 Heavily tipped to be taking over from David Moyes at Manchester United after the World Cup, Louis van Gaal has a bit of a reputation in football circles of – how can we put this delicately – being a bit of a deranged megalomaniac, with many cracking apocryphal stories and quotes being attributed to the man over the course of his long career in football.

1. Van Gaal is a keen enthusiast of making utterly bombastic quotes upon taking managerial jobs. Upon taking his first ever professional role at Ajax in 1991, Van Gaal shook the hand of the Dutch club’s director and supposedly told him: “Congratulations on signing the best coach in the world.”

Then, upon taking over at Barcelona in 1997, he used his first press conference to declare: “I have achieved more with Ajax in six years than Barcelona has in one hundred years.”

Then, after taking charge of the Holland national side in 2000, he opened his introductory press conference by saying: “I’ve signed a contract with the Dutch national team until 2006, so I can win the World Cup not once but twice.”

Sadly, history shows that this wasn’t quite the case.

2. When judging the man’s mental state, just take this quote into consideration: “I cry almost every day. There’s always something that touches me.”

3. Back in February of 2011 while in charge at Bayern Munich, Van Gaal demonstrated that he had the big brass cojones to drop Bayern’s big names (specifically Luca Toni) if he felt the need to and demonstrated the fact in unnecessarily literal fashion by dropping his trousers in front of the entire squad during a team meeting.

Toni, presumably during a therapy session, later recounted the ordeal:

“Van Gaal wanted to make clear to us that he can drop any player from team. It was all the same to him because, as he said, he had the balls.

“He demonstrated this literally by dropping his pants. I have never experienced anything like it, it was totally crazy.

“Luckily I didn’t see a lot, because I wasn’t in the front row.”

4. Singularly unimpressed at witnessing Marcel Desailly almost decapitate Jari Litmanen with a flailing leg during the 1995 Champions League Final, an incensed Van Gaal staged an impressive recreation of the Milan defender’s high boot on the touchline by demonstrating his kung-fu prowess to the fourth official…

5. While Barcelona manager, Van Gaal was introduced to a 14-year-old Gerard Pique by the young defender’s proud grandfather, who was a director at the club at the time.

Without so much as an introductory handshake, Van Gaal barged Pique to the floor and then leaned over the poor bugger and quipped: “You’re too weak to be a Barca defender!”

The man’s a complete conkerbox! We can’t wait!