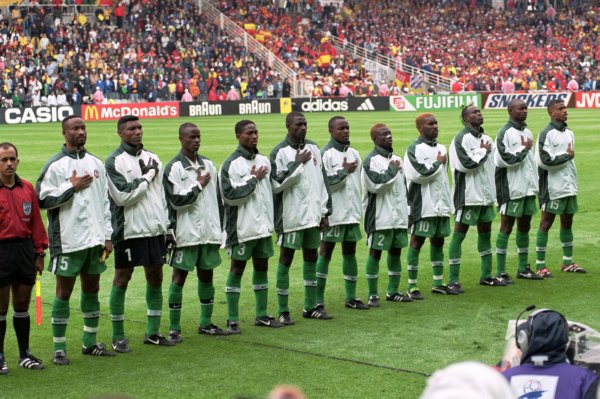 Despite being included as one of France 98’s bottom seeds, Nigeria beat both Spain and Bulgaria to emerge from Group D as surprise winners before tanking against Denmark in the second round and being dumped out of the competition in spectacular style.

The first shock came in Nigeria’s opening game against Spain which saw them come from behind to beat their European opponents thanks to a goal that almost broke the sound barrier.

Square at 1-1 come the interval, the much-fancied Spaniards went 2-1 up through Raul a little over 60 seconds into the second half – however, thanks to a ridiculously flubbed own-goal from ‘keeper Andoni Zubizarreta, Nigeria pulled themselves level once again at 2-2 in the 72nd minute.

Just five minutes later, Sunday Oliseh scored what proved to be the winner – slamming home a thunderous shot from 30-yards with a clean-as-you-like connection to send the Super Eagles soaring to the top of the group, where they duly stayed…