What with a glass of red wine joining the great pantheon of things chucked onto the pitch – or in this case, the Manchester United bench – we thought we’d take a look at some of the other weird and wonderful (and potentially dangerous) stuff that has been re-appropriated as missiles and hurled turf-wards by furious fans over the years.

Play was held up momentarily during the most recent Superclasico tie between Boca Juniors and River Plate when referee Silvio Trucco was forced to remove a stray sandal from the pitch.

Yep. Some daft apeth had to trudge home and explain to his wife why he’d come back with only 50% of the footwear he’d left the house wearing that morning.

Protesting Blackpool fans caused a lengthy disruption during the opening stages of their match against Burnley last season, with a hail of tennis balls and satsumas being thrown from the terraces and causing the tie to be put on ice for several minutes while the pitch was cleared.

The beleaguered Seasiders probably ended the day wishing the protests had seen the game thrown out entirely, going on to lose 1-0 and suffer the ignominy of having their assistant manager sent to the stands for threatening to punch one of his own players in the face.

Protesting against the ownership of poultry magnates Venkys, Blackburn fans released a chicken (draped in a Blackburn flag) onto the pitch during Rovers’ game against Wigan in 2012 – much to the amusement of several players.

Possibly the last time Darren Bent scored a competitive goal (October 2009) and even then the bereft then-Sunderland striker needed a rogue beach ball (thrown onto the pitch by a Liverpool fan) to beat a completely bamboozled Pepe Reina.

The less said about this one, the better.

Back in 2012, the Belgian Pro League match between old foes Anderlecht and Club Brugge was suspended after just seven minutes due to a barrage of frosty missiles being slung at the players from the crowd. 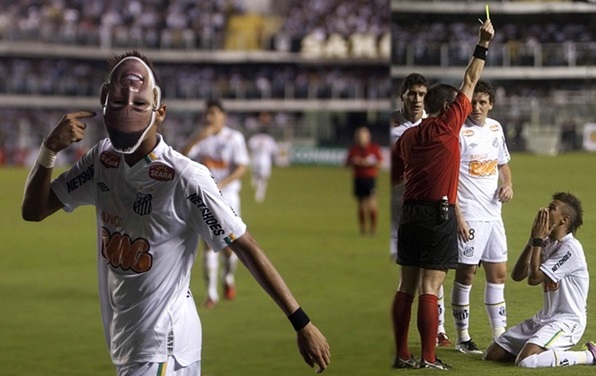 Having scored against Colo Colo in the Copa Libertadores, Neymar (then of Santos) picked up a mask of his own face thrown from the crowd and proceeded to don it in celebration.

He was then booked for his pillockry by the entirely unimpressed referee.

Here we see linesman Milciades Saldivar, flat out on the touchline after being pelted with a projectile during the South American Cup game between Universidad de Chile and Nacional in Montevideo in 2011… 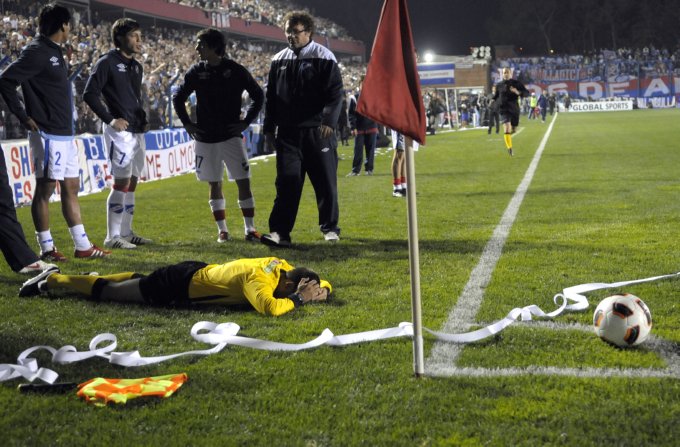 The ‘projectile’, as can clearly be seen in the photo above, was nothing more than a rolled-up paper streamer – a missile that would weigh no more than a few grammes even if it were wet-through.

Still, that didn’t stop Senor Saldivar from milking the incident for all that it was worth, lying “unconscious” on the floor until he was carted from the pitch by paramedics and loaded into the back of an ambulance while the referee was left with no option other than to call the match off with 43 minutes of the second-half remaining. 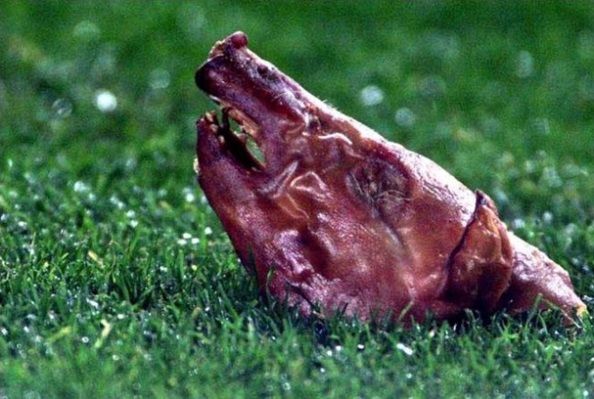 Of course! The pig’s head that was thrown (along with a full bottle of whiskey) at “traitor” Luis Figo during the infamous “Derby of Shame” between Barcelona and Real Madrid in 2002.

To be fair, you simply have to respect the commitment of the livid fan who smuggled it in. 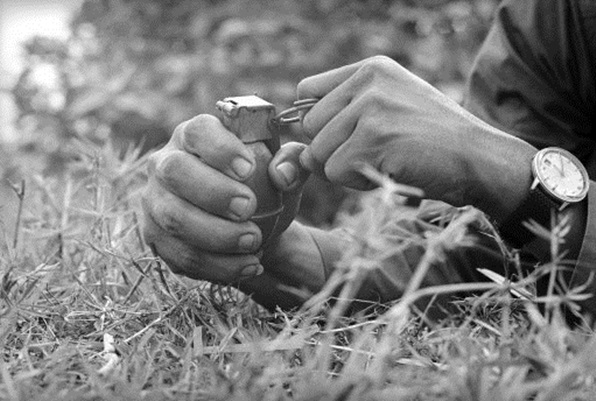 Flagged up by our pals over at Flashbak, a 1965 league match between Brentford and Millwall was held up after what was thought to be a live hand grenade was lobbed into the Brentford goalmouth.

A brave policeman put it in a bucket of sand and took it to the local station, where it was later discovered to merely be a harmless replica.

Buggeration! We knew we’d forgotten an obvious one. Anyway, back in his Arsenal days, Cesc Fabregas found himself on the wrong end of an unprovoked vegetable attack from Chelsea fans.

If you’re not aware of the link between Chelsea fans and celery, we suggest you Google it.

In which, having supposedly stolen it from an Atalanta fan outside the stadium, an intrepid group of Inter ultras torch a moped and then add the fionishing touch to their reign of rampant vandalism by sending it crashing down to the (thankfully empty) lower tier of the San Siro, Quadrophenia-style.