With Jack Wilshere’s little anti-Tottenham diatribe causing a few silly ripples of controversy today, Pies thought we’d look at a few other occasions wherein players have allowed the celebratory revelry of a title parade or trophy presentation get a bit out of hand – some more literally than others.

Any road up, let’s get things started with…

Yep. He was at it last year too. With the Gunners celebrating their 2014 FA Cup win with a parade around Islington, Wilshere was filmed asking a crowd full of Arsenal fans what they thought of near-neighbours Spurs and getting a thoroughly predictable response in return…

After Real Madrid won the Copa Del Rey in 2011, Sergio Ramos did the decent thing and chucked it under the team bus to celebrate – and, yes, it was completely knackered…

The Dutch midfielder celebrated Galatasaray’s recent 2014/15 league win by leading a rousing (and slightly squiffy-looking) chorus of “Fener Don’t Cry” in Turkish during the trophy parade.

Super Lig authorities are said to be looking into it as we speak.

Ajax shored up their first Dutch league title for six years with a victory over Twente in 2011, and their goalkeeper couldn’t think of a better way to celebrate the momentous achievement than by chucking the trophy under the bus à la Sergio Ramos. 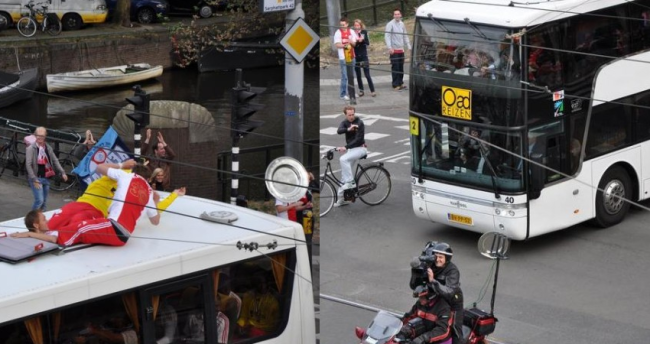 Continuing the Ajax theme, Verthongen managed to ensure the Eredivisie trophy ended up on the floor for the second successive season the following year when he dropped it on his own toe…

Before a pre-season friendly between the two sides last summer, AEK officials proudly presented Roma hero Totti with a special commemorative plaque as a little token of their appreciation for his talents.

Roughly two seconds later, it lay in pieces on the ground…

The famously feisty – unless confronted by an apoplectic Scotsman, of course – Milan midfielder chose the club’s 2011 title celebrations to openly brand departing Inter Milan coach Leonardo (who fell out with Gattuso several times during his prior stint with the Rossoneri) a “man of shit” in a delightful little ditty sung with a gaggle of fans.

Reportedly on the back of a mammoth 24-hour drinking session, Eto’o got on the mic and called Real Madrid players “cabrones” during Barcelona’s 2004/05 title celebrations. He was promptly fined €12,000 for his troubles.

Pissed as a fart, Bradford City’s veteran midfielder Stuart McCall was involved in a car accident outside Valley Parade after securing promotion to the Premier League with the Bantams back in 1999…

We’re ending on a particularly brutal title celebration mishap that came amid the chaos and confusion that enveloped the conclusion of this season’s Iranian Gulf Pro League season.

Basically, Tractor Sazi (who were going into the final day of the season top of the league on goal difference) naturally thought their 3-3 draw against second-placed Naft Tehran would be enough to see them crowned champions.

However, third-place Sepahan (who were a couple of points behind the top two) had won elsewhere, meaning they leap-frogged both Tractor and Naft to win the league.

Sadly, a dodgy stadium announcement neglected to mention that Sepahan had snatched the title at the death, sparking wild celebrations from the Tractor boys. 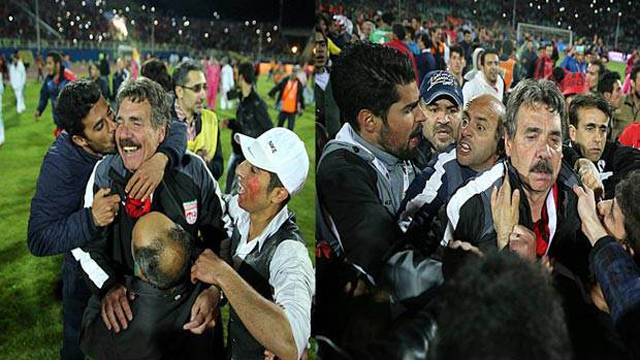 You can actually pinpoint the moment his heart breaks.