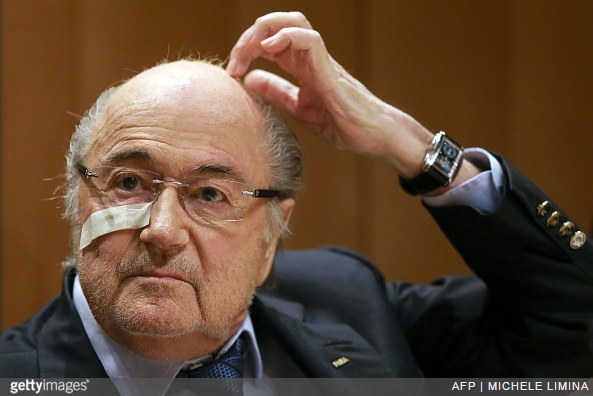 Earlier today, both Sepp Blatter and Michel Platini were banned from the football realm for eight years apiece after being found guilty of ethics breaches.

Directly after the verdict came in, Blatter pitched up at FIFA’s former headquarters in Zurich to stage a news conference. He hired the building, which still houses FIFA’s marketing department, as a private citizen in order to give his reaction to his exiling at the hands of the very Ethics Committee he put in place.

As you can imagine, he went down swinging – cutting the figure of a dishevelled, frankly knackered-looking 79-year-old-man who will continue tilting at windmills and fighting the oncoming tide while his livelihood continues to crumble away beneath him.

Here are the Top 10 quotes from the slightly rambling conference, which took in Nelson Mandela and a quick assessment of the Chinese economy on the way.

Opening statement: “To say that it’s a good day for me or FIFA. This would be totally wrong. Thank you for coming.”

On always being the last to know: “I just received [the news of his eight-year ban] a little bit later than you … why are the media informed before the persons directly accused?”

“You can identify me as an optimist … we (Blatter and Platini) thought we were in the clear. We are in a so-called gentleman’s agreement … what astonished me is that they [FIFA ethics committee] deny the existence of this agreement.”

Refusing to accept the verdict: “I am ashamed that the committee goes against the evidence that is presented.”

“Inside FIFA people could not understand why the president was suspended.”

“Even suspended, I am still the president. The president can only be removed by the congress.”

“Human beings needs to be respected. It has created a lot of collateral damage. My family has been mocked.”

On seeing no ships: “FIFA is still working well.”

Ending on an ominous note: “I regret, but I am not ashamed … I am a man of principles. These principles are: never take money that is not earned. Secondly, pay your debts. I’ll be back.”

You’ve got to hand it to the guy, he’s 100% committed to the delusion.