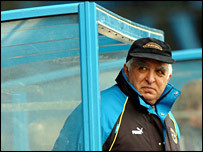 1 ‘Everyone’s very comfortable on the ball and almost all of them are athletic. We play what I call “orgy football”: the other team know they’re going to get it, but they don’t know from whom or where from.’
Cardiff’s ex-chairman Sam Hammam takes a wrong turn at metaphor junction.
2 ‘She shouldn’t be here. I know that sounds sexist but I am sexist. This is not park football, so what are women doing here? We have a problem in this country with political correctness – bringing women into the game is not the way to improve refereeing and officialdom. If you start bringing in women you have big problems. It is tokenism for the politically correct idiots.’
Mike Newell, a spokesman for chauvinists everywhere. 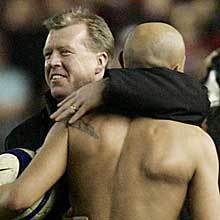 3 ‘The ever-smiling Steve “Magnificent” McClaren is without doubt the most two-faced and false person that I have ever had the misfortune to meet in football, who should first spend his time actually trying to understand his own players’ mentality instead of wasting so much time trying to understand the English press. I was absolutely shocked and totally disgusted by the way he treated me. Only in England could such a man with such obvious and limited abilities be made national coach.’
Massimo Maccarone, a man after our own hearts.
4 ‘If anybody’s offended by seeing a backside, get real. Maybe they’re just jealous that he’s got a real nice tight one, with no cellulite or anything. I thought his bum cheeks looked very pert.’
Ian Holloway takes a shine to Joey Barton’s arse.
5 ‘I have disconnected myself from West Ham and signed a contract with Liverpool. I can consider myself a Red Devil.’
Maybe someone should have told Javier Mascherano a bit more about his new club.
6 ‘[Adrian] Mutu, like a good gypsy, has tried to be slick. Then again, all Romanians are slick, they have it on their DNA.’
Palermo president Maurizio Zamparini, after the Fiorentina striker scored while one of Palermo’s players lay injured.
7 ‘I don’t think I have picked up any Cockney traits. It is a special thing reserved for people raised and born here. When Ray Parlour was at the club he used to tell me these expressions and get me to say things like ‘You need your bins on if you can’t see the goal from here, geezer.’ But he’s gone now, as has another Londoner Sol Campbell, so there’s less Cockney in the club these days. People didn’t even say my name correctly. They kept calling me Terry Henry. At one point I just gave up because half my team-mates were calling me Tel or Telboy.’
Terry ‘Tel Boy’ Henry doesn’t want to be a Cockney.
8 ‘One thing I do know about the new chairman is he’s a biscuit baron! When I heard that I was overjoyed and thought ‘Yes! Bourbons all round!’ I have got a bit of a superstition about eating biscuits the night before a game. I think it must have started at away games. In the hotels they always have those little packets of biscuits and I started having a couple before a game. I always seemed to do well so I carried it on, it stuck. When I come back from my injury maybe the chairman will be able to sort me out with a supply – he could be the perfect chairman. I won’t get a goal bonus, I can get a biscuit bonus.’
Dean Ashton. He likes biscuits.
9 ‘I haven’t laughed so much since Ma caught her tits in the mangle.’
Ken Bates responds to Chelski’s accusations of racism against Leeds Utd.
10 ‘I had a bust-up with Schmikes (Peter Schmeichel) once. He was towering over me and we’re eye to eye. I’m looking up and thinking “If he hits me, I know I’m dead”. The other players were almost covering their eyes.’
Sir Alex Ferguson remembers the scariest part of his 20 years in charge at Old Trafford.