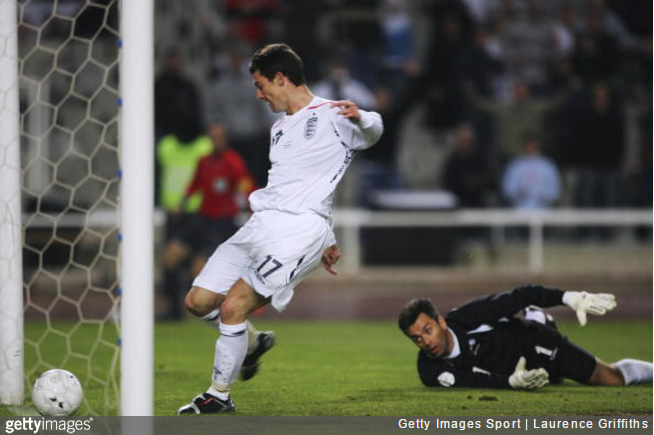 Plenty of perfectly decent players have only managed to score only once for England over the years, with the likes of Andy Cole, David Hirst, Rodney Marsh, Alan Mullery, Stan Bowles and Carlton Palmer all failing to double their tally over the varying courses of their respective international careers.

However, there are a select band of England internationals who went one better: by scoring on their debut for the Three Lions and then leaving their immaculate 1:1 ratio completely untainted by failing to win a second cap.

Focusing solely on the post-war (i.e, 1945 onwards) era and in no particular order, these be those men…

After impressing with Preston, Nugent became the first player from outside the top flight to receive an England nod for eight years when Steve McClaren called him into the squad for a Euro 2008 qualifier against Andorra as a replacement for the injured Darren Bent.

Nugent came on for the last 10 minutes in Barcelona and took roughly nine of them to score his first international goal, sprinting headlong to nudge an already goal-bound Jermain Defoe shot over the line from a distance of centimetres (see photo above).

With Sven-Goran Erikkson fielding two entirely different teams in either half, Jeffers came on at the break to make his England debut in a friendly against Australia in 2003.

England went on to an embarrassing 3-1 defeat at Upton Park, though Jeffers did pop up to score the consolation after combining with fellow debutants Wayne Rooney and Jermaine Jenas.

Despite starring for Southampton at the time, Wallace only made one appearance for the national team, scoring in a friendly against Egypt out in Cairo in January of 1986.

That said, it was one more senior cap than his brothers Ray and Rod managed between them, so Danny still managed to maintain sibling bragging rights despite never being selected again.

Sadly for Caulker, his debut goal against Sweden in 2012 was rather overshadowed by the efforts of one Zlatan Ibrahimovic, who rather stole the show by scoring all four of his country’s goals in a 4-2 rout.

Goddard was selected by Ron Greenwood as part of a 40-man provisional squad that would go on tour as part of England’s warm-up for the 1982 World Cup.

The West Ham forward came on in a friendly against Iceland and scored the equaliser in a 1-1 draw but was one of the 18 men axed from the final draft of Greenword’s World Cup selection.

Along with Messrs Nugent and Jeffers, Goddard is one of only three players to have scored for England despite having only ever made one sub appearance.

The legendary Tottenham player-turned-manager only ever made one appearance for England as a player, scoring after just 40 seconds in a 5-2 win over Portugal in something called a ‘Festival of Britain Celebration Match’ in 1951.

A former left-half with Sheffield Wednesday and Everton, Kay is mostly famous for receiving a life-ban from The FA getting himself embroiled in the sensational betting scandal that rocked English football in the mid-1960s.

However, his other, often overlooked claim to fame is that he joined the ‘One-in-One Club’ by scoring for England on his debut in an 8-1 friendly win over Switzerland in 1963.

This all before having his international career cut short by a pesky prison sentence.

A proper, fiercely loyal one-club man, Bradford made over 500 appearances and scored over 250 goals for Bristol Rovers, even turning down an offer from Bill Shankly to join Liverpool as he went.

The burly striker only ever made one appearance for England, scoring the fifth goal in a 5-1 rout of Denmark in 1955.

In his day, Lee was a bit of a sporting superstar of the Midlands, having banged in more than 130 goals for Derby County, Leicester City and Coventry as well as playing first-class cricket for Leicestershire too.

He won his only England cap in 1950 while playing for Derby, scoring in a 4-1 win over Northern Ireland at Windsor Park.

Seeing as there were actually only nine players to manage a ‘one-in-one’ record for England post-war we thought we’d top up the list by chucking in the first player ever to score on his national debut and then bow out.

That man was Robert Kingsford (who may or may not be pictured above), who scored on his England debut against Scotland in 1874 and then immediately retired from international duty aged 24 to become secretary of his club side, Wanderers FC.