With the Ballon d’Or long-list pumped out yesterday, Pies thought we’d have a look at some of the stranger names to have received nominations over the years.

We’ve only included nominees dating from 1990 onwards, specifically because we couldn’t be bothered to trawl back any further than that.

Right, without further ado, in we delve… 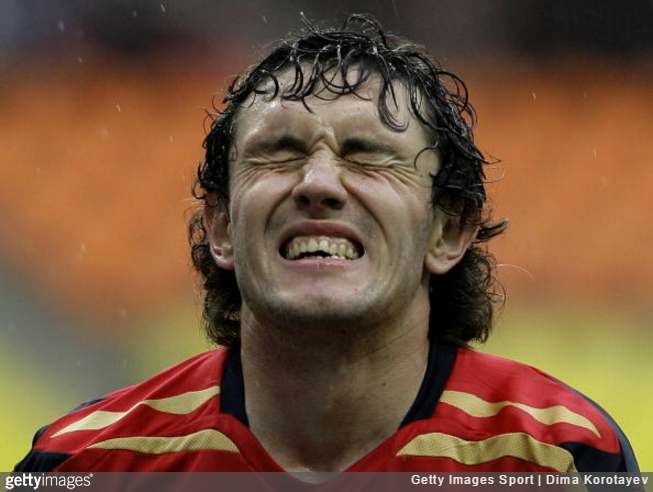 Yuri Zhirkov – A perfectly serviceable left-back but hardly the flashiest of names, Zhirkov earned himself a Ballon d’Or nomination in 2008 after starring for Russia at the European Championships but sadly received no votes when it came to the crunch.

Tony Yeboah – The Ghanaian powerhouse’s run on top was brief, but his goal-scoring exploits at Leeds earned him a nod in 1995. He finished 23rd in the poll with five votes, level with Roberto Baggio.

Gennaro Gattuso – While his passion and commitment were never in doubt, Rino’s game was a wee bit limited to hassling and harrying like a deranged mongrel. Still, we suspect his nationality was enough to squeeze onto the 2006 shortlist give the Azzurri’s triumph at the World Cup that year.

Luis Garcia – Never really more than a bit-part player at Liverpool, Garcia finished bottom of poll in 2005 – though he was level on points with previous Ballon d’Or winner Pavel Nedved.

Traianos Dellas – Given their exploits at Euro 2004, the Ballon d’Or shortlist was peppered with miscellaneous Greek players that year, the most ordinary of all probably being their big, ugly centre-back.

Nani – The flighty Manchester United winger somehow ended up on the 2011 ballot, finishing second to last with 0.26% of the vote.

Cris – Lyon’s Brazilian defender was nominated twice in 2005 and 2006, but received exactly zero votes on both occasions.

Jan Koller – The huge, lumbering Dortmund target man was shortlisted in 2003 and actually received one vote, the same as Ronaldinho.

Papa Bouba Diop – Diop scored when Senegal did a number on France in the opening game of the 2002 World Cup and so promptly found himself tipped for the Ballon d’Or. In fairness, he did go on to collect two votes.

Gus Poyet – The Chelsea midfielder was nominated in 1999 but managed to attract the same number of votes as Ukrainian goalkeeper Oleksandr Shovkovskyi – i.e, none.

Tore Andre Flo – Flo was given the nod the year before Chelsea team-mate Poyet and managed to match the Uruguayan’s vote tally. However, he was in good company as the likes of Roberto Baggio, Fabio Cannavaro, Ariel Ortega, Zvonimir Boban, Pavel Nedved, Andrey Shevchenko and Juan Sebastian Veron also failed to attract a single vote.

Dean Saunders – The then-Liverpool striker finished 13th in the poll in 1991 – dead level with Hristo Stoichkov, who went on to win the Ballon d’Or three years later.

John Jensen – Coinciding serendipitously with Denmark’s win at Euro 1992, the soon-to-be Arsenal midfielder finished up in 14th place, level with one Paolo Maldini.

Daniel Amokachi – The Nigerian forward was included on the 1995 shortlist after scoring a massive six league goals for Everton. He finished exactly 144 points behind eventual winner George Weah, who won the Ballon d’Or with a tally of 144 points.