In honour of it being International Women’s Day, Pies have delved into the archive to bring you some fascinating photos of ladies’ football in its infancy.

Let’s dive in, shall we… 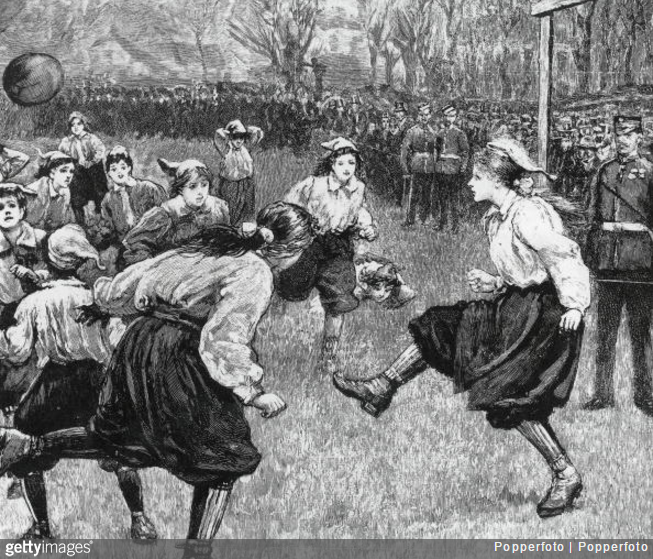 The British Ladies Football Club play their first ever match, 1895

A shot is attempted during the Theatrical Ladies football match at White Hart Lane, 1912

Girls from the Oxford Revue prepare for a charity football match, 1914…

…only for chaos to ensue in the goalmouth due to the different kits being worn!

A team of female workers from the Handley Page aeroplane factory emerge from the tunnel ahead of a match versus the Sterling Tele Company, 1919

Looking resplendent in white, the ladies of the Dick, Kerr & Co. locomotive manufacturing factory team line up for a photo, 1920

The French ladies team (along with the referee, right) get things underway in an international match against England, 1921

France captain Carmen Pomies shares a cordial kiss with her English counterpart, Florrie Redford, ahead of an international charity match at Herne Hill, 1925

Action from the same match here as the French goalkeeper makes a save.

England were represented by Preston Ladies, and funds raised by the match were donated to the Shipwrecked Mariner’s Society.

An exhibition game is staged in Naples between a team of men and a team of women, 1931

For the record, the men ran out 5-3 winners.

Members of the Belgian women’s football team arrive at Liverpool Street Station ahead of their world championship game against Preston, 1934

A midfield tussle from the match between Dagenham Docks and Hayes Women at the Merry Fiddlers Ground in Becontree Heath, 1936

The Preston Ladies limber up in Bedford during their grand tour of the south of England, 1936

In all three photos, Preston are seen being whipped into shape by Lily Parr, the six-foot, chain-smoking pioneer of English women’s football.

One of the first openly gay sporting personalities, Parr dominated the pre-WWII football landscape, scoring over 900 goals by the time she retired in 1951.

There’s more on Parr and her incredible career here should you be interested.

Members of The Amazons, a women’s football team from Devon, train on the village green in Combe Martin, 1954

Ramsgate women’s football team celebrate winning their local championship down on a barge down at the harbour, 1956