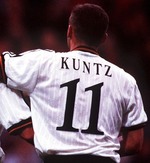 1 Stefan Kuntz
The former German international was a key figure at Euro 96 for both his team and the British tabloids.
2 Milan Fukal
The Czech defender was once on trial with Leeds and linked with a move to Manchester City but has since gone on to do Fukal. He now plays for hometown club FK 97.
3 Quim
The Portuguese keeper is actually called Joaquim Manuel Sampaio da Silva, but uses his nickname blissfully unaware at the delight he provides for English-speaking fans.

4 Ars Bandeet
This one could be an urban legend, but apparently this was the name of an Algerian international in the 1970s.

5 Johan de Kock
From a possible cock and bull story to a plain old Kock story. The former Dutch international is another Euro 96 veteran. He won the Uefa Cup with Schalke in 1997
6 Danny Shittu
The Nigerian international was recently relegated from the Premier League with Watford. The 6ft 3in is used to entertaining Football League stadium announces from his time with QPR.
7 Chiqui Arce
Another example of a Latin footballer exacerbating an already humorous name. Paraguay international Francisco Arce at one point had his name as Chiqui Arce on the back of his shirt.
8 David Goodwillie
Goodwillie became the youngest scorer in the SPL when he scored for Dundee United against Hibs in March. Now aged 18, Goodwillie will be entertaining fans for many years to come.

9 Rafael Scheidt
He’s Scheidt and he knows he is. Rafael was signed for Celtic by the equally Scheidt management duo of Kenny Dalglish and John Barnes for Â£5 million. He started just one game and was shipped out by Martin O’Neill.
10 Segar Bastard
Bastard played for Upton Park and England in the late 19th century. He went on to become a referee and was therefore quite literally the Bastard in the black.
[Image: Getty]