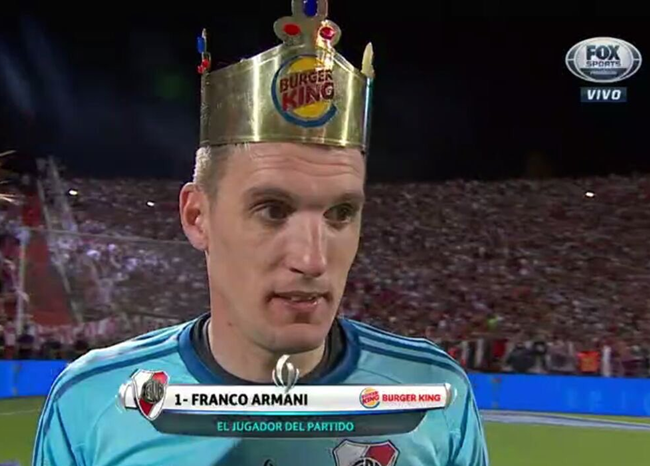 Last week, Franco Armani put in a stoic ‘Man of the Match’ shift to keep Boca Juniors at bay as River Plate triumphed in the Argentinian Super Copa.

As a fitting reward for his endeavour, the goalkeeper was subsequently forced to appear on television wearing an actual crown at the behest of sponsors Burger King, thus somewhat diminishing the prestige of his award.

Inspired by Armani’s obvious misery, Pies thought we’d take a timely look at some of the other frankly rubbish Man of the Match trophies that have been doled out over the years.

Burger King were responsible for equally surreal scenes at the end of last season’s Argentinian Super Copa match when, after scoring in a 3-0 win for Lanus, Lautaro Acosta was presented with a complimentary barbecue grill and custom apron… 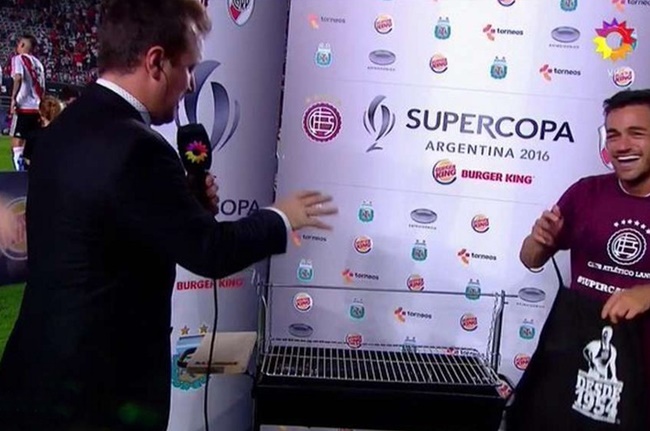 After being crowned Man of the Match in a Rumbelows Cup game for Charlton Athletic, striker Carl Leaburn did his best to feign enthusiasm after winning a 21-inch colour television…

When Carl Leaburn picked up his Rumbelows Cup MOTM award.

Pick something from the catalogue

Ray Kennedy was named Man of the Match in Liverpool’s 1-0 win over Bristol City in 1979, which led to him taking home what looks like an oscilloscope courtesy of Waltham Electronics…

Underwhelmed after finishing 15th in the Eredivisie the season prior, Dutch side NEC Nijmegen hatched a fiendish plan to coax better results out of their players in 2013/14 by promising free bikini car-washes to each game’s top performer.

NEC went on to get relegated after finishing 17th.

You should see the size of the padlock

As if to mirror the esteem of the tournament itself, it’s only fitting that standout players (Luka Modric, in this instance) at the Club World Cup take home a large key made from flimsy cardboard. 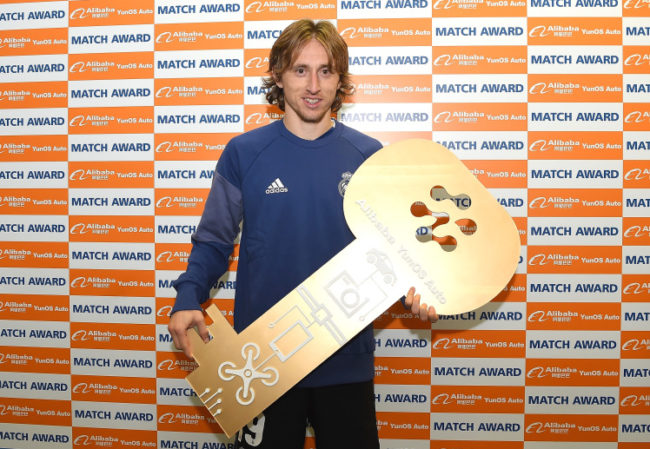 Indeed, thanks to Toyota, the giant gaudy Man of the Match key is a tradition that spans all the way back to 2008…

On par with the Club World Cup, preseason friendlies have become hotbeds for hideously tacky cups and awards.

Many leagues offer cash bonuses as part of the Man of the Match bundle.

Here’s Lebogang Manyama of Ajax Cape Town gladly accepting 2,000 rand on a pre-paid credit card after pulling the strings in a match against Orlando Pirates.

Give him a big hand

Sometimes you’ve just got to sit back and admire the amount of work that has gone into something entirely inconsequential.

To that end, here’s Peter Schmeichel handing over a large novelty Hublot watch to *checks notes* Mark Wright from The Only Way Is Essex after the Soccer Aid match in 2016…

One for the mantelpiece

Raul Gonzalez Blanco pretty much won it all as a player: six La Liga titles, four Spanish Super Cups, two Intercontinental Cups, three Champions Leagues – oh, and this plastic piece of tat for being named Man of the Match in New York Cosmos’ win over Fort Lauderdale in the 2015 NASL Championships.

In 2015, CAF thought it would be a good idea to allow fans to present the Man of the Match award to players directly, leading to wonderful scenes such as this… 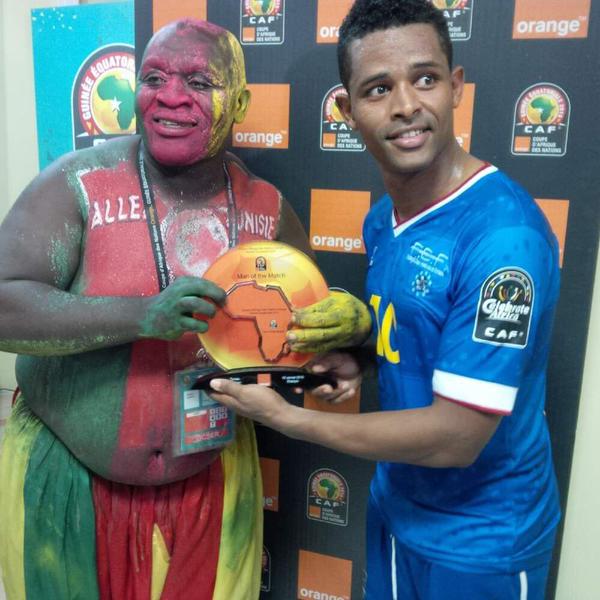 Ahead of the 2018 World Cup qualifier against Zambia, the Nigerian Football Federation decided to rally their players by announcing that the Man of the Match would win 10 large bags of rice.

The bags would then be donated to the player’s charity of choice courtesy of match sponsors Big Boy Rice. 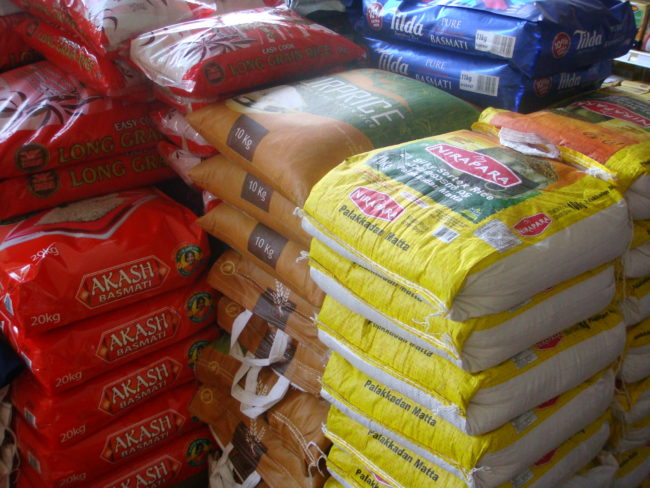 Flicking a casual two fingers to the disciplines of sport science and nutrition, Shabanie Mine FC happily ply their players with a full pallet (24 bottles) of Castle lager as a reward for putting in a Man of the Match outing. 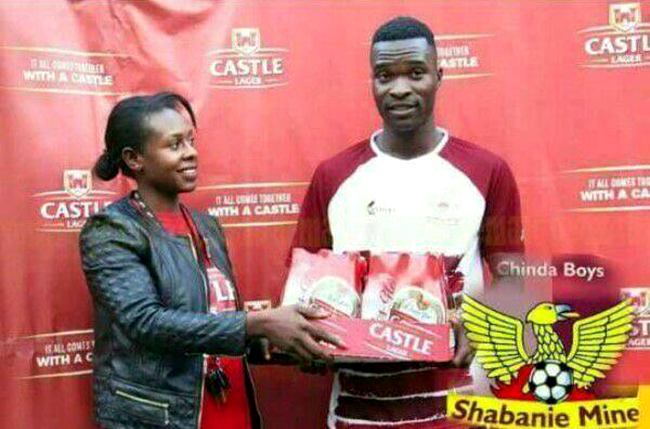 Turns out they’re a little more health-conscious in the Botswana Premier League, with the Player of the Month taking home a plastic tub of various groceries… 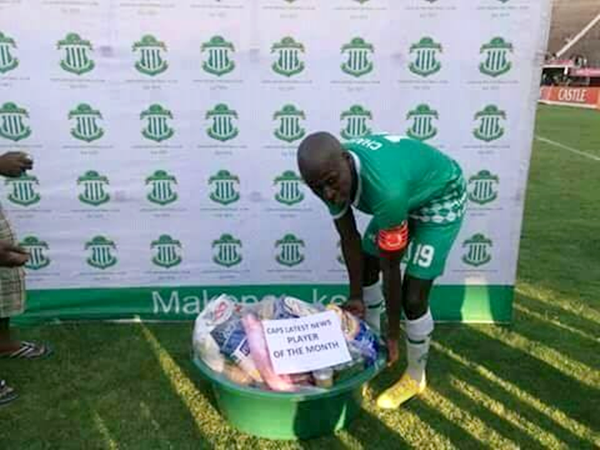 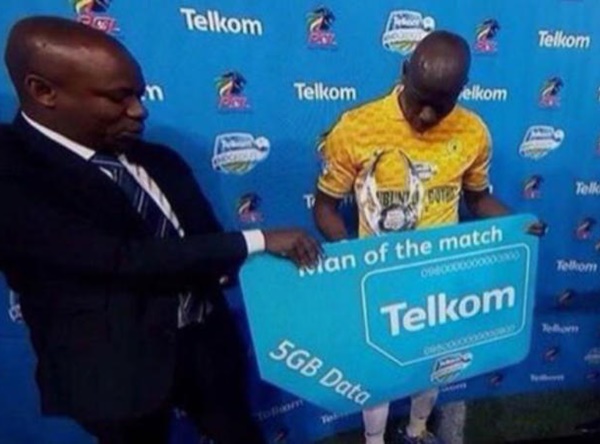 While Pies were told to never look a gift horse in the mouth, that’s just perilously close to being insulting.

Polish club Gornik Zabrze hand over a live chicken to their Man of the Match which is presented to the lucky winner by superfan Stanislaw Setkowski (that’s him in the plumage), who breeds the poultry himself… 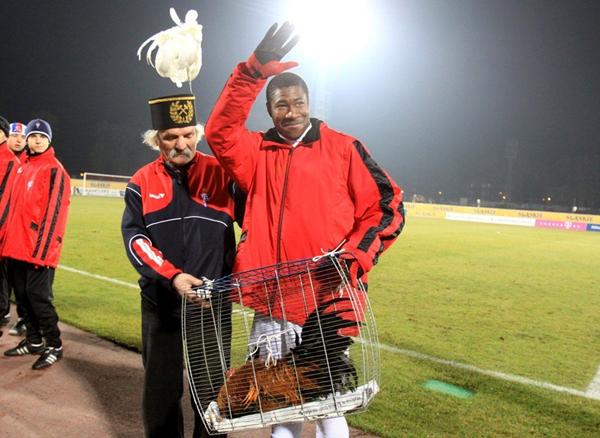 Any more godawful Man of the Match awards out there? Feel free to let us know…