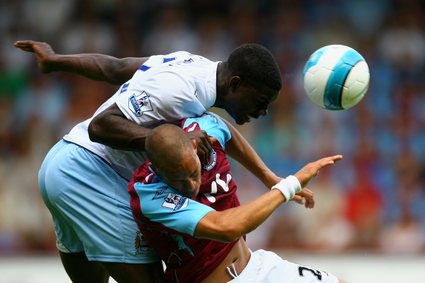 No, we are not advocating FIFA introducing another needless competition with a name like the European Inter-League Champions Toto Mickey Mouse Under 21 Cup, but following the under 21 European Championshups this summer Pies has but together a dream team outfit featuring the pick of the Premier League’s youngsters.
Scott Carson
Seems to have been around for ages now, but he is still only 21 years old. It is excellent news for Carson and England that he secured his loan move to Aston Villa rather than sit on the Liverpool bench all season.
Micah Richards
Showed his class at centre-back in Manchester City’s victory over West Ham at the weekend (pictured above), but Pies is playing him at right-back where he can bomb forward and show off his Brazilian Soccer School pedigree. This kid only turned 19 a couple of months ago.

Gareth Bale
Injury kept him out of a Premier League debut at the weekend, but there is no doubting his class from his form at Championship and international level. Still only 18, Bale will become hot property this season if he can stay fit.
Gerard Pique
The oft talked about Spaniard will be hoping to break into the Manchester United first-team this season after spending last season on loan at Real Zaragoza. Now aged 20, Pique is approaching the age when Fergie tends to make a player part of his plans or ship them out. Has looked a class act in the reserves, and many United fans expect him to make the grade.
Younes Kaboul
A poor result for Spurs, but their big money French under 21 signing showed some promise. Could form a useful partnership with Ledley King (if he is ever fit).
Aaron Lennon
Burst to prominence at last summer’s World Cup when he basically England’s only impact player. Although he has struggled with injuries since then, he is still young and is constantly improving. Quick, tricky and intelligent.
Cesc Fabregas
Our midfield maestro and El capitan. The phrase old on young shoulders personified. Has a great eye for a pass and plays cleverly to give himself lots of time on the ball.
Lucas Leiva
Leiva is our gamble pick. Pies hasn’t seen too much of him in action yet, but you don’t earn the rave reviews in Brazil that he has without being a bit special. He is an attacking midfielder who will support the strikers. Also, Leiva will provide a physical presence in our otherwise lightweight midfield.
Nani
Pre-season has given us an insight into Nani’s abilities. If the opposition left-back thought they had it tough looking after Lennon, spare a thought for the right-back. The Portuguese international is not quite as quick as our right winger, but more than makes up for it with his skills and vision.
Ryan Babel
Made his Premier League bow at the weekend and showed glimpses of what he is capable of with two good attempts on goal. Might take a little time to adjust to English football, but he is a big lad and will be able to handle the rough and tumble.
Nicklas Bendtner
If Babel can handle the rough and tumble then Bendtner certainly can. At 6ft 3in and 13 stone, the Danish international bounces defenders off him. He always looks capable of scoring a goal at any level.