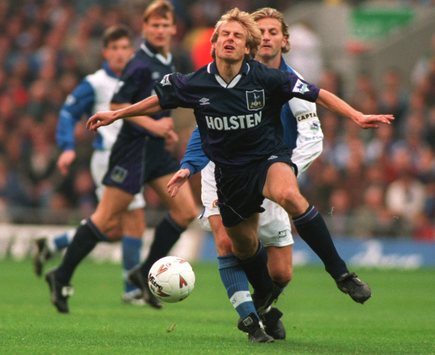 With England facing Germany in a friendly tonight, Pies looks at the German players who have dared to ply their trade in England.
Bert Trautman
Regardless of your thoughts on the effect foreign players have on the England national team, you could hardly hold it against Trautman. He came to England as a prisoner of war during the Second World War. When the war was over, he stayed on and played for Manchester City. His most famous moment came when he played with a broken neck in the 1956 FA Cup final.

Moritz Volz
Crazy Volzy is still doing his thang for Fulham. The problem is this usually involves getting stuck in toilets, riding to matches on his folding bicycle or giving himself food poisoning.
Markus Babbel
The big defender was an important signing for Gerard Houllier and featured prominently in Liverpool’s treble of 2001. He also enjoyed a decent loan spell at Blackburn, but he spell in England was dominated by a lengthy period out suffering from a virus. He hung up his boots at the end of last season and is now assistant coach at Stuttgart.
Robert Huth
Poached by Chelsea as a 17-year-old, Huth really broke into the first team at Stamford Bridge. Move to Middlesbrough after last summer’s World Cup but injuries have restricted him. He barely played last season and is now due to see an ankle specialist after a fresh setback.
Christian Ziege
The left-back whored himself around the Premier League between 1999 and 2004. During that time he played for Middlesbrough, Liverpool and Spurs. He is now director of football at Borussia MÃ¶nchengladbach.
Michael Ballack
He might be German football’s current golden boy, but his first season in England was nothing to write home about. Some players take time to settle and adapt, but this season will tell whether Ballack has the balls to fight for his place.
Dietmar Hammann
Didi came to England to play for Newcastle, but moved to Liverpool after just one season. He then moved to Bolton (for about five minutes before changing his mind) and is currently studying at the University of Sven, Manchester. His invasion profile must, sadly, include the fact that he scored the last goal in an England match at Wembley in the last game of Kevin Keegan’s reign.
Steffen Freund
A no-nonsense midfielder, Freund became a fan favourite during his time at Tottenham. He also had a brief loan spell at Leicester City. Spurs fans nicknamed him Easyjet after being entertained by one too many skybound shots!
Thomas Hitzlsperger
Hitzlsperger is a bit different to most of this team because rather than being an international at the top of his game, he came to Aston Villa as an 18-year-old Bayern Munich youth graduate. His move back to Germany to improve his international prospects seems to have paid off. He won the Bundesliga last season with Stuttgart.
Jurgen Klinsmann
Arguably the best ever German import. Enjoyed two brief but excellent spells at Tottenham. Overcame his reputation as a diver by turning it into one of football’s best ever goal celebrations. Currently sitting with his feet up in the USA, which he has done for the last three years (except he got paid for it when he was Germany manager).
Karl-Heinz Riedle
Liverpool bought a World Cup winner when they signed Riedle but, as Manchester United could prove if they fielded Sir Bobby Charlton this weekend, that is no use if you are past your best. The former Borussia Dortmund striker never held down a regular place at Anfield and didn’t fare much better when he moved to Fulham.
CLIVE MASON/ALLSPORT