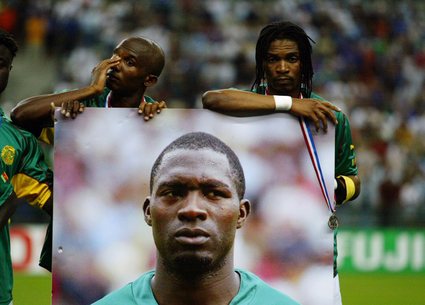 Following the tragic death of Antonio Puerta yesterday, Pies celebrates the James Deans of the football world who died too young.
Aaron Flahavan
The Portsmouth keeper died after crashing his BMW in 2001 aged 25. His blood alcohol level was three times over the legal limit. His brother Darryl plays for Southend.
Niccolo Galli
The Arsenal youngster died in a motorcycle accident while on loan to Bologna in 2001. The 17-year-old was back in Italy to complete his studies, but Arsene Wenger claimed he was a certainty to make the Gunners’ first team.
Andres Escobar
The Colombian defender was shot dead in 1994 after returning from the World Cup. His shooting was rumoured to have been ordered by a betting syndicate after Escobar’s own goal led to Colombia’s unexpected first-round exit.
Serginho
The Brazilian defender – not the AC Milan player – died in 2004 after suffering a heart attack while playing for SÃ£o Caetano against SÃ£o Paulo.

Duncan Edwards
England and Manchester United’s prodigy died from the injuries he sustained in the Munich Air Disaster in 1958. He was only 21 and was tipped by those who saw him play to have become one of football’s greats.
Antonio Puerta
Died yesterday after suffering a heart attack and collapsing during Sevilla’s game against Getafe on Saturday. The Spain international was 22 years old and his girlfriend was eight months pregnant with his child.
Marc-Vivien Foe
The Cameroon international died in 2003 after collapsing during a Confederations Cup semi-final against Colombia. The 28-year-old was on-loan at Manchester City at the time of his death.
Jimmy Davis
Manchester United trainee and former England youth international Davis was killed in a car accident hours before the start of the 2003-04 season. He was on-loan at Watford when he crashed his BMW on the M40 in Oxfordshire.
Laurie Cunningham
Cunningham, the first black player to represent England in a competitive match, died in 1989 in a car crash in Madrid. The 33-year-old was in Spain playing for Rayo Vallecano.
John White
The Spurs star died in 1964 at the age of 27 after being hit by lightning while playing golf.
Ray Jones
The 18-year-old QPR and England under 19 striker died at the weekend when the vehicle he was travelling in collided with a bus.
Photo Shaun Botterill/Getty Images