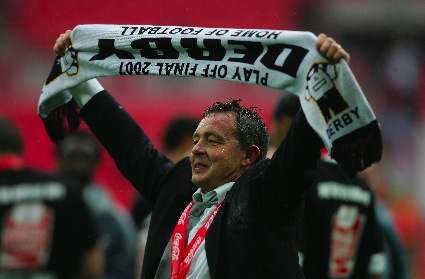 The weekend after an international break is always a popular time for a chairman to boot out his manager. You’ve had a couple of weeks to argue with your unwanted employee without the hassle of training interfering with ruck time, plus there’s plenty of spare time for a little light tapping up of a replacement. So who’s most likely to get the hoof after even the sniff of a bad result next weekend. Here’s the top ten as we see it…
Photo: Getty

1) Billy Davies
Derby have to wait until next Monday for a game, which gives extra arguing time for the jock and his chairman. With Derby seemingly hating him, and a cushy Leicester job waiting for Davies, this saga isn’t going to end with Billy leading Derby to Premier League survival.
Odds: 4/1
2) Martin Jol
Poor, poor Martin. Arguably the best Spurs manager for over a decade, and he’s still quietly treading water while his employers find the right man to replace him. Cue a north London derby. Defeat to Arsenal will give Levy this perfect excuse to boot the Dutchie on the left hand side without the fans going mental.
Odds: 7/1
3) Li’l Sam
Is it just us or is he not very good without the big man alongside him? Brimingham away is a big game, and one Bolton of old would have probably won.
Odds: 50/1
4) ‘Arry Redknapp
Only talk of the Spurs job could unsettle Harry. We doubt this would happen, but the Pompey board might not take kindly to Spurs even sniffing around his big red face.
Odds: 500/1
5) Steve Bruce
Again, unlikely, but there’s been a small section of unhappy Brum fans moaning about Bruce for 18 months now.
Odds: 500/1
6) Stevie Coppell
Okay, okay, this list should have been more of a “four”, but Reading have started slower than last year and a cloud will always hang over Stevie under pressure due to his Man City spell. Could he also be a target for Spurs? That would unsettle the Berkshire club who rightly worship the grass Coppell trots on.
Odds: 2000/1
7) BIG Sam
It’s Newcastle. Anything could happen! Plus the England job might free up tomorrow…
Odds: 2000/1
8) Arsene Wenger
Okay, okay, he’s just signed a new contract. But with talk of new owners, Wenger might still be too pally with Dein if Dein’s people don’t come through.
Odds: 2000/1
9) Jose Mourinho
If Hiddink steers Russia to glory over England, Roman might be so impressed, he’ll hoof out Jose. Maybe.
Odds: 2000/1
10) Paul Jewell
Okay. Technically he’s not even a manager yet. But chances are he’ll be the Derby boss very soon, and Derby look so poor so far this season, he might get the sack after his very first game.
Odds: 4000/1