Every Tuesday throughout the season, Pies will feature its Player Power Rankings, a top 10 list of the hottest footballers in the Premier League, based on form, influence and, you know, how much we like ’em. So without further ado, here goes with the inaugural Player Power Rankings: 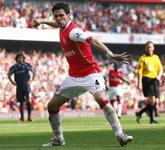 1 Cesc Fabregas (Arsenal)
Fabregas is the main reason why Arsenal currently sit on top of the Premier League, and few would dispute that he has been the player of the season so far. He’s added goals and increased stamina to his frighteningly mature repertoire of incisive passing and tactical awareness. If he continues to improve at this rate, he’ll be the best midfielder in the world in no time at all. Some Gooners would argue that he’s there already – they wouldn’t now swap him for Thierry Henry + Â£20m. And I say this as a Spurs fan. Nice one Cesc – you are top of our first-ever Player Rankings.

2 Micah Richards (Man City)
Richards justly received the first Barclays Player of the Month award this season. He has been immense at the back for City â€“ particularly against Man Utd, when he was nothing short of heroic â€“ and has become almost as vital to City’s progress as Fabregas is to Arsenal’s.

3 Michael Johnson (Man City)
The 19-year-old midfielder has been a revelation and it says a lot for Johnson’s development that the disruptive, but influential Joey Barton hasn’t been missed at all. City boss Sven-Goran Eriksson can’t stop raving about him: ‘Most midfielders have a speciality, whether it’s defending, tackling, passing or shooting, but you can’t say that about Michael because he can do all of those things, and that is very rare for such a young man. This is a very big talent.’
4 Gael Clichy (Arsenal)
No wonder Arsenal didn’t seem overly concerned to let Ashley Cole go to Chelsea. Clichy has started brilliantly this season and you’d struggle to find one Arsenal fan who would take Cashley over the athletic young Frenchman.
5 Jose Reina (Liverpool)
The best penalty saver in the world saved Liverpool at Portsmouth. Pepe has conceded just two goals in five Prem games so far and has arguably surpassed Brad Friedel and Petr Cech for the title of the division’s best keeper.
6 Gareth Bale (Tottenham)
Doesn’t look out of place in the top flight. Far from it – Bale has been Spurs’ best player this season, which isn’t saying too much, but stillâ€¦ I saw him in the flesh at Fulham a couple of weeks ago and he was terrific, tearing up the pitch and making any number of lung-busting runs into dangerous positions from left midfield.
7 Nemanja Vidic (Man Utd)
Vidic is the rock at the heart of Man Utd’s new, mean defence. He never thinks twice about putting his body on the line, which is handy when you consider that United’s other centre-back is Rio Ferdinand, who doesn’t always put his body on the line. The Serb is equally dangerous in the opposition’s box from set pieces – he’s the new Steve Bruce, only better.
8 Elano (Man City)
Brazilians and the Premier League have never made a happy match, but Elano, who came to England from Shakhtar Donetsk in the Ukraine â€“ so he should be able to handle a Manchester winter â€“ looks to the manor born in a Sky Blue shirt and has fully vindicated Sven’s bold decision to sign him.

9 John Utaka (Portsmouth)
Another foreigner who has taken to the Prem without any problem at all, the man they call the Torpedo has been in splendid form for Pompey, so much so that Harry Redknapp seems to have decided that he has no need whatsoever for the misfiring David Nugent. Utaka’s blend of pace and power is ideal for the English game.
10 Clint Dempsey (Fulham)
Deuce looked all at sea last season, as if he had no idea how to adapt to the English style of play. Fast forward a few months and he looks like a different player, full of confidence and ready to accept the mantle of playmaker at Craven Cottage. Full marks to Lawrie Sanchez for playing him in a more advanced position, alongside the main striker, rather than out on the wing.
Agree with our list, or banging your head on your PC in frustration? Let us knowâ€¦