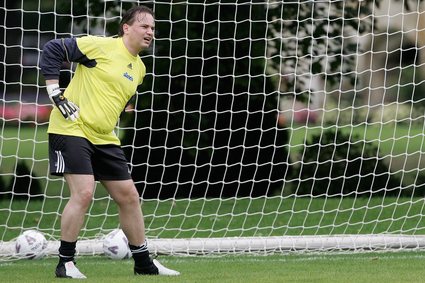 Pies puts together a team so pumped up with drugs that even a Glenn Roeder team-talk could get them motivated!
Mark Bosnich
The then Chelsea keeper was sacked in 2003 after testing postive for cocaine. He claimed that he had his drink spiked in a nightclub. He later admitted to being a coke addict but said he had not touched the drug until after his failed test. OK…
Abel Xavier
The Middlesbrough full-back tested positive for an anabolic steroid in 2005 and was banned for 18 months. Xavier said the offending substance must have been in a supplement he took while ill with a virus. Now plays for LA Galaxy.
Jaap Stam
Jip Jaap Stam may be a big Dutchman, but in 2002 he was a big Dutchman with a five-month ban. The then Lazio man tested positive for nadrolone.

Rio Ferdinand
Rio famously picked up an eight-month ban from the FA in 2004 after missing a drugs test. The ban, which meant the centre-back missed Euro 2004, was noticeably longer than some in this team who had actually failed tests.
Fernando Couto
Two Lazio men in our back-four. Couto also tested positive for nandrolone. He denied the allegation but his B test also came back positive. The former Portuguese captain was banned for four months.
Lee Bowyer
Bowyer set the tone for his bad boy career when he failed a test in 1994. Having tested positive for cannabis, the then Charlton player was banned and forced to undergo a rehabilitation programme.
Shaun Newton
The West Ham player was banned for seven months in 2006 after testing positive for cocaine. He said: “It was an isolated incident but I must face up to my responsibilities. I in no way condone the taking of drugs and hope that my experience will act as a deterrent to others.”
Edgar Davids
Another of the four-month nandrolone gang circa 2001. The Dutchman was at Juventus at the time. Nandrolone was seemingly the Serie A drug of choice at the time.
Diego Maradona
Erm, take your pick. Maradona was banned for 15 months in 1992 for cocaine (of course we now know his rehabilitation was not entirely successful). He was banned again in 1994 after failing a test for ephedrine.
Adrian Mutu
The Romanian international was sacked by Chelsea and given a seven-month ban after testing positive for cocaine. He is now getting his career back on track with Fiorentina.
Christophe Dugarry
The French striker was one of the first football players to test positive for nandrolone. He failed test in June 1999.