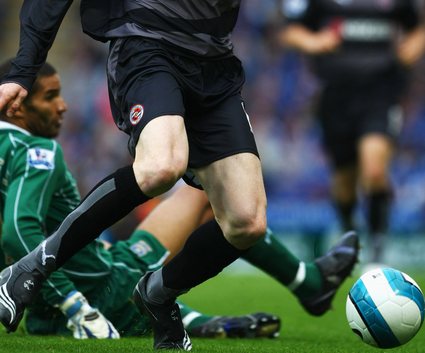 1 Regardless of age and experience, David James is still capable of making terrible mistakes such as the rush of blood which saw him charging out of his penalty area like a bull to Dave Kitson’s matador.
2 Fortunately for Portsmouth, Reading’s Marcus Hahnemann is capable of a few blunders of his own as he demonstrated excellently during his side’s 7-4 defeat at Fratton Park.
3 Peter Kenyon’s face was a picture as the Chelsea crowd chanted Jose Mourinho’s name. Avram Grant’s face is never a picture!

4 The Special One must have slipped a fiver to Clint Dempsey to give John ‘Brute’ Terry a good whack on the cheekbone.
5 Elano is definitely one to watch. He caught my eye playing for Brazil last summer which led to me selecting him for my Champions League fantasy team last season. I don’t know how many points he scored, but it wasn’t many!
6 Talking of fantasy football, Yossi Benayoun seems to have finally decided to score some points for my failing team. I had visions of him setting up Fernando Torres and gang all season long. Should have known Rafa’s rotation would mess with my plans.
7 Sunderland’s new signing Danny Higginbottom looked like a fish out of water against Blackburn. He may have been star of the show at Stoke City, but he made it look like a very big step back up to the Premier League (see Roy Keane’s wincing face as evidence).
8 David Bentley’s Horror Hair and hyperactive eyebrows make for very annoying interviews.
9 Sammy Lee’s interviews are equally annoying. He sounds like a Scouse schoolboy explaining to the headteacher why he hasn’t done his homework yet again. I wish Phil Gartside would put him out of his misery. He may be a good coach, but so is Steve Wigley apparently. Nuff said.
10 Arsenal grinding out 0-1 away wins against a technically inferior but physical side? Mais c’est pas possible!
11 But as long as Manchester United keep grinding out the wins too we are in for some fun. I can’t wait for an Arsenal-Manchester United game with all the bite of a few seasons back.