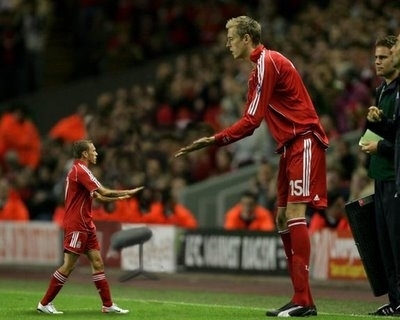 Pies offers up a team of lanky players who are literally head-and-shoulders above any opposition they come up against. Some would say Sam Allardyce spent most of his time at Bolton doing this, but we don’t care – we’re doing it anyway.
Konstantinos Chalkias
The Greek keeper had an unsuccessful spell at Portsmouth a couple of years (well, time spent playing second fiddle to Sander Westerweld can hardly be deemed successful, can it?). The 6ft 6in was soon shipped back to Greece via a brief period in Spain.
Zeljko Kalac
The Leicester City flop is now the bench-warming keeper of AC Milan. The Aussie is 202cm (6ft 7.5in) tall. He has earned the nickname Spider due to his gangly legs, big armspan and the fact that it is easier to pronounce than Zeljko.

Zat Knight
The Aston Villa centre-back is a relative midget in the team standing at a mere 6ft 6in.
Rob Jones
Hibernian captain Jones used to be a PE teacher for special needs children. He soon realised that a 6ft 7in PE teacher would intimidate even the bravest of kids and swapped to a career in professional football instead.
Dennis Lawrence
The Trinidad and Tobago international was a match for Peter Crouch at the 2006 World Cup because of his 6ft 7in height (although Lawrence is a little bulkier than Crouch). Lawrence can currently be found skyscraping his way around Swansea.
Yang Changpeng
The stereotype-bashing Chinese striker was on trial at Bolton earlier this year. As far as we know he is the tallest footballer in the world at 6ft 9in tall (feel free to correct us if you know better though).
Nicola Zigic
The 6ft 7.5in Serbian has moved to Valencia this summer after spending the previous season in Spain with Racing Santander.
Peter Crouch
Yay! You had been waiting for him, hadn’t you? Crouch is not the tallest player in our side, but certainly the lankiest. The robot-dancing striker might require a seat with extra legroom on the Liverpool bench but his 6ft 7in frame gets him no sympathy around here.
Kevin Francis
The Football League’s iconic big man of the 1990s. Another 6ft 7in striker who had his best spell converting crosses for Stockport County.
Jan Koller
The 6ft 7.5in Czech striker is a beast. Currently plying his trade for Monaco, Koller is about as big a target as a targetman can get.
Tor Hogne Aaroy
The Norwegian giant stands at 204cm (that is over 6ft 8in, oldies). He started his career at Frigg (go on, allow yourselves that schoolboy snigger you’re dying to let out). He had a very brief spell at Rosenborg before moving to Aalesunds where he still plays.