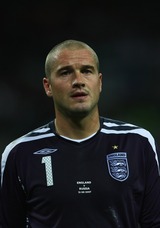 A couple of days ago I posted my Prem team of the season so far. Today, I’ve done a flops of the season – it’s not rocket science, is it?
GK Paul Robinson (Spurs) Eighteen goals conceded in nine games, a litany of mistakes and a general lack of positional awareness/sharpness mean that Robbo comfortably wins selection as our flops’ custodian.
Honourable mention Jens Lehmann has been injured, but even so it seems Manuel Almunia has usurped him at Arsenal. Not a good start to the season for Mad Jens.
RB Chris Baird (Fulham) The worst player in the Premier League? I think so. Baird has been stinking up Craven Cottage.
Honourable mention Liam Rosenior, the player ostensibly replaced by Baird, has not done much better at new club Reading.
CB Steven Taylor (Newcastle) Talked about as a Future England Captain in the summer, but has warmed the bench a few times this season. I stuck him in my fantasy team, thinking he’d have a breakthrough season, but he’s clearly not guaranteed a first-team place under Big Sam.
Honourable mention Michael Dawson of Spurs â€“ he’s a bit shit isn’t he?

CB Jon Woodgate (Middlesbrough) I admit to not having seen much of him this season, but Boro fans that I know say his form has been pretty poor, and he looks lacking in motivation.
Honourable mention Joseph Yobo. David Moyes seems to prefer the Alan Stubbs/Joleon Lescott axis in the centre of defence, which is not surprising given Yobo’s form, which has dipped below his usual high standards this season.
LB Ian Harte (Sunderland) Okay, no one expects much of the one-legged Irishman (and okay, I struggled a bit to find a left-back who has really flopped), but one substitute appearance so far tells its story. Not sure why Keano bought him from Levante, although he’s still only 30.
Honourable mention Wayne Bridge. Outplayed Ashley Cole last season, can’t get a game this season. 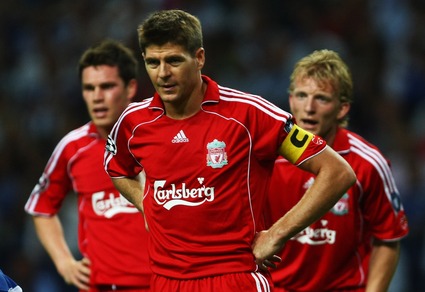 MF Steven Gerrard (Liverpool) A piece on the Guardian blog by Scott Murray about how Stevie G’s best position is out wide â€“ because he’s too reckless and not intelligent enough a player to control a game from central midfield â€“ provoked a huge, mainly positive response from Liverpool fans who are tired of the way sections of the media (Sky Sports in particular) lionise Gerrard. It’s not exactly a Gerrard backlash, but you have to admit that his form in the middle of the park this season has been disappointing. The ‘Pool have missed the calming influence of Xabi Alonso, no doubt.
Honourable mention Phil Jagielka has struggled to command a regular starting place at Everton. Perhaps he is too much of a utility player to fit in anywhere?
MF Kevin Nolan (Bolton) What’s happened to Nolan, who was knocking hard on the England door not so long ago? No idea, but he’s half the player he was.
Honourable mention Michael Essien. I know he’s injured now, but when he has played this season, he’s looked half the player he was in 2006/07.
MF Gilberto Silva (Arsenal) Due to the excellence of Mathieu Flamini, Brazil’s national team captain can’t get a game right now, having had such a solid season last time out.
Honourable mention Morten Gamst Pedersen. The Gamster goes missing for large chunks of the season, then he’ll suddenly burst into life with a few contenders for goal of the season. By his presence on this list, you can guess which Gamst we’ve seen so far.
MF Stilian Petrov (Aston Villa) Just not doing the business at Villa, and has even been booed by his own fans recently. May look for a move elsewhere in January.
Honourable mention Christian Wilhelmsson looks great for Sweden; put him in a Bolton shirt and he’s become invisible.
CF Darren Bent (Spurs) That price tag weighs heavier and heavier on Bent’s shoulders by the week. Too early to write him off, but has all the makings of one of English football’s most expensive flops.
Honourable mention Andriy Shevchenko. Goes without saying. The longer he stays at Stamford Bridge, the more lasting damage he does to his reputation and legacy. Will surely leave in January, back to Milan maybe?
CF David Nugent (Portsmouth) Harry Redknapp was prepared to ditch him after a month or so, and despite scoring in the Carling Cup, Nugent has been a definite flop so far, and hasn’t looked Prem class.
Honourable mention Villa’s Marlon Harewood â€“ everything he touches turns to shit. West Ham did well to ditch him.
Manager A toss-up between Little Sammy Lee at Bolton and Martin Jol at Spurs. I give the job to Little Sam, because I can’t see any light at the end of the tunnel for Bolton, whereas at least I can see Tottenham turning things around.