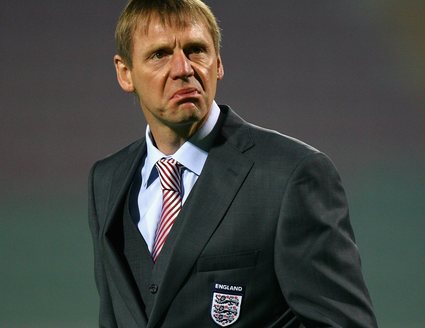 Well we say worst possible new England manager but we were are working within the realms of reality here (for once). In other words the list takes for granted that the new man will probably already have some experience within the game of football and probably some experience in management too. Hopefully this explains George W Bush’s omission.
Alan Shearer
It is not the time to be taking a gamble on an untried manager. He may have the respect of the players but (as those with a good enough memory to remember the hassle he got towards the end of his international playing days will vouch) that can soon change.

Stuart Pearce
Psycho has got Steve McClaren Mark II written all over him. Maybe in 15 years but for now his tactical knowledge is not up to international level. You wouldn’t expect any accusations that he lacked passion to be levelled at him though!
Sam Allardyce
Probably the News of the World’s preferred candidate. You would imagine Big Sam has got some skeletons that would prefer to stay in the cupboard than take on one of the world’s most high-profile jobs.
Luis Felipe Scolari
This is probably no time for national pride, but crawling back to a man who has turned you down once is taking things a bit too far.
Jurgen Klinsmann
See above comment regarding national pride, but a German England manager would be a new low (or should that be LÃ¶w?).
Terry Venables
For once there is no imminent competitive football to worry about. It is time for a clean break and continually harking back to Euro 96 is not going to solve England’s current problems.
Rafa Benitez
If throwing your hat in the ring is how you signal your interest in the job, Rafa has been dangling his sombrero over the ring as part of some Anfield power struggle. He would probably be the most whiny England manager of all time.
Roy Keane
Why appoint someone who makes a point of coming home from World Cups early?
Alan Curbishley
Other than he is English, I am not sure why Curbs has been touted as a candidate for the job. He did a decent job for many years at Charlton but he has hardly set the world alight at West Ham and lacks experience in European football never mind international football.
Tony Adams
Basically for the same reasons as Pearce. He is still learning his trade and it is far too early in his managerial career to be taking on the England job.
Sven Goran Eriksson
Can you imagine Brian Barwick approaching Sven tail-between-legs to tell him that we were all wrong and he did the best he could with what he had? Let’s pretend it’s not true!