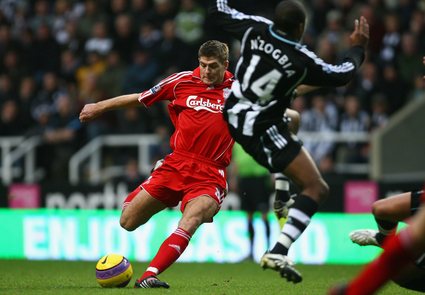 HEROES
Robert Green His injury-time penalty saved secured a point for West Ham against Tottenham.
Nicolas Anelka Grabbed a shock winner for Bolton against champions Manchester United.
Steven Gerrard Infuriatingly impressive for Liverpool against Newcastle. Scored an excellent goal and was involved in some free-flowing football. Shame none of this is applicable to last Wednesday night…
VILLAINS
John Terry Yet another childish tantrum from the England skipper this time when he disagreed with referee Andre Marriner’s decision to send-off Michael Essien. Terry appeared to throw the ball towards the ref.
Paul McShane Had a nightmare in Sunderland’s 7-1 defeat at Everton. He spent the match watching long balls bounce over his head.
Stephen Hunt His horrendous thigh-high lunge on Manchester City’s Gelson Fernandes could have been very nasty. The Reading man was lucky to escape with a yellow card.