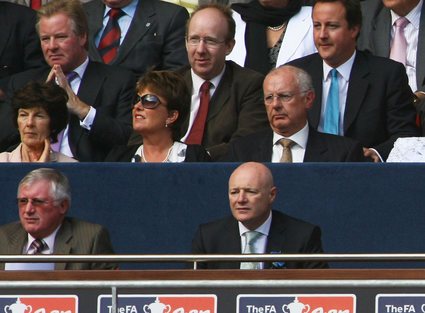 David Cameron
We have just got rid of one England manager who changed his policies depending what the press and the public said, so we don’t need another one. Besides he is only two rows away from Chelsea chief executive Peter Kenyon so he would probably prefer a job with the Blues.
George W Bush
He would be the new Kevin Keegan: wanting to go all-out-attack against everyone.
Garth Crooks
Half-time would have to be extended to allow him time to finish his team-talk (some bookies are offering Crooks as an outsider by the way! No, we don’t know either).

Jamie Oliver
Just like McClaren he would constantly be wanting to ‘try something new’. Whether its pomegranate juice in your bubbly or 5-3-2, England’s players are not likely to adapt.
Tim Henman
Another Englishman cruelly ruled out for his love of backhanders. Shame.
Angela Merkel
The German Chancellor hasn’t spent the requisite four years in the USA becoming de-Germanised enough to be an acceptable candidate.
Richard Hammond
The Top Gear presenter has had his teeth whitened a la McClaren and is equally adept at crashing out on BBC primetime.
The Archbishop of Canterbury Rowan Williams
Glenn Hoddle taught us that religion and the England job don’t mix very well, especially not when the person in question is Welsh!
Amy Winehouse
England have enough players who don’t perform when they are supposed to without the manager getting in on the act.
Lewis Hamilton
Sven has already perfected convincing the country we will win a tournament before fading away in the latter stages. Plus England chokers officially have to get on with team-mates called Alonso.
Steve McClaren
Hang on a minute…
Click here to see our list of people who could feasibly get the job, but shouldn’t!