It’s the end of the year, so, as the rules of modern journalism dictate, here is an end-of-year list. I hope you have five minutes to read Pies’ favourite football moments from 2007 â€“Â no doubt there are loads of moments that you remember that don’t make this list; post an angry comment if that is the case. Anyhow, here’s part one (I’ll post part two tomorrow). Enjoyâ€¦ 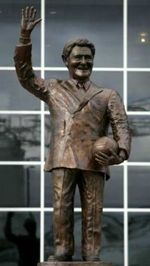 20 The Ted Bates statue fiasco
You couldn’t make this story up. An 11ft-tall bronze statue of Southampton legend Ted Bates was erected outside St Mary’s stadium in March, only to be taken down not long afterwards, after offended fans branded it a ‘joke’. Saints’ supporters were understandably not happy that the statue of Bates was put up with legs the same length as its arms (that’s the part that still cracks me up), and a face that looked more like Milan Mandaric, the ex-chairman of bitter rivals Portsmouth. Talk about rubbing salt in the wounds.
I know I shouldn’t laugh really: after all, the statue cost approximately Â£112,000, half of which was raised by fans via the Ted Bates Trust. But you have to admit it is funny.
Read the rest of part one after the clickâ€¦

19 Robbie Savage taunted by darts fans
In which football’s floppiest-haired panto villain gets what he richly deserves. He’s behind you!

On a similar theme, I also greatly enjoyed Jose Mourinho being booed by wrestling fans.

18 Carlton Palmer gets new jobâ€¦ as an estate agent
If I made a list titled ‘English footballers who could become estate agents after they retired from playingâ€¦’ (not likely, I admit), then Carlton Palmer would be somewhere near the bottom of it. So imagine my surprise when I discovered that Palmer now runs his own property agency, specialising in overseas luxury houses, villas and flats. True story. Carlton can clearly give Robbie Fowler (who owns half of Oldham) a run for his money.
17 Mike Riley sends off Reading’s mascot 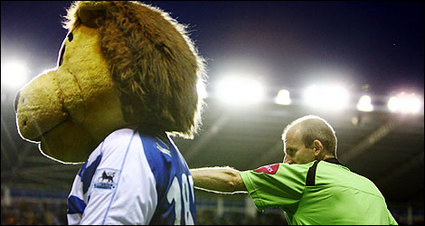 There are a few reasons why I love this moment. Firstly, because it’s just so surreal to watch professional footballers rolling around on the floor, hugging a huge cuddly lion. Second, because the lion is sent off by ref Mike Riley. Nice one Mike. And third, watch how Stephen Hunt jumps in with a two-footed tackle right at the end of the clip â€“Â the lad can’t help himself! Watch the incident here
16 Paul Robinson scores for Spurs from inside his own half

Robbo’s had a very shitty year, so I thought I’d cheer him up by including his finest moment of 2007, which also happens to be one of the year’s most memorable goals. Except for Watford ‘keeper Ben Foster, who horribly misjudged the flight of the ball. Watch the goal here (apologies for shaky video quality)
15 The bravest football fan in the world?

Best personalised football shirt of the year, no question. As I said at the time, this Newcastle fan is a very, very brave man indeed (or plain foolish) â€“Â you don’t mess with Keano. Sorry Roy, I know it’s not true, but I did laugh when I saw it.

14 The Craig Bellamy golf club incident
This was just a fantastic tabloid football scoop. Craig Bellamy ‘confronted’ Jon Arne Riise with a golf club during Liverpool’s team-bonding trip to Portugal in February, reportedly because the square-headed Norwegian didn’t want to get up and do a bit of karaoke. The pair kissed and made up, but Bellamy didn’t last much longer at the ‘Pool. he did find the time to perform an ironic golf-swing goal celebration though (watch below), so maybe he didn’t feel too bad about the incident.

I had to include this, because of all the funny football videos posted in the last 12 months, this one makes me laugh the most â€“Â don’t ask me why, it just does. Kamara’s enthusiasm is so infectious, and I love the fact he happily admits that he doesn’t know what’s happened, where other broadcasters might try and bluff it. I also love the fact that Chris forgets how to turn his neck without also turning his whole body. (And Jeff Stelling once again proves himself to be by far the sharpest tool in the box.)
12 John Terry is indestructible

John Terry will stick his head in anywhere. He has no concern for his personal safety, and I guess that’s why Chelsea fans respect him. When Terry head-butted Abou Diaby’s foot during the Carling Cup final in February, he came off worseâ€¦ a lot worse. The fact that JT went to the post-match party, later that day, only reinforced his reputation as an indestructible nutter.
11 David Beckham wins the Primera Liga with Real Madridâ€¦ at last 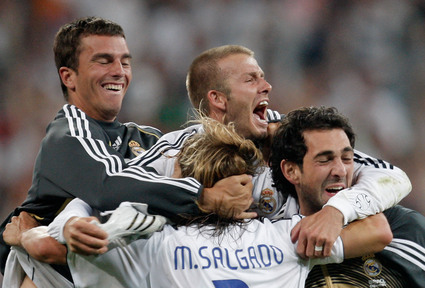 I was genuinely pleased that Becks won the league in his last season at Madrid. He worked his nuts off to help the club win silverware but it never worked out, until his final competitive game for the club, at home to Mallorca. It didn’t really matter that he was substituted midway through the second half, or that the man who replaced him, Jose Antonio Reyes, turned the match in Real’s favour (they went on to win 3-1 and pip Barcelona to the title) â€“Â to see Beckham celebrate with his kids after the game was a heart-warming moment.
I hope you enjoyed part one. Part two of this list will be posted tomorrowâ€¦