As promised yesterday, part two of our top football moments of this year continues belowâ€¦ (check out part one)
10 Ricardinho’s worst corner ever

Hilarious proof that even Brazilian footballers aren’t infallible when it comes to a good blooper.
Read the rest of the list after the clickâ€¦ 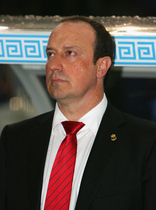 Rafa Benitez is Pies’ beard wearer of the year, no question.
8 GrannyGate
Stephen Ireland is the new Gazza – undeniably talented with his feet but daft as a brush. Lying about the death of one grandmother could be seen as unfortunate; lying about the death of both is the behaviour of someone with severe judgment and maturity issues. And don’t even get me started on his Superman pants.
7 ‘Not the face!’ Cristiano Ronaldo loses his looksâ€¦Â briefly 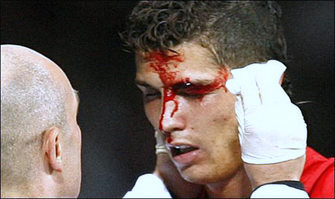 ‘It’s not a problem,’ Ron said after he picked up a nasty gash above his right eye, caused by a stray elbow during Man Utd’s Champions League match against Roma at Old Trafford in October. ‘In four or five days I will be beautiful once again,’ he continued, proving that his ego remained as healthy as ever.
6 Sean Davis shows Lee Young-Pyo how foreigners should dive

We’ll never now for sure if IFK’s Andres Vasquez meant this rebona chip, although the fact he can do it at will might suggest he did. One of our bloggers described it at the time as ‘The Greatest goal ever scored’. That’s obviously not true, but it’s still a hell of a strike. If I tired to do that, I’d break both of my ankles.
4 David Healy can’t stop scoring for Norther Ireland

Healy scored 13 goals in Northern Ireland’s 12-match qualifying campaign for Euro 2008. That’s a staggering, mind-boggling tally, especially given that Healy was playing in such a mediocre team â€“ and one that didn’t qualify for next year’s finals. He may never scale those heights again, but Healy’s record will surely stand for a long, long time.
3 Kaka reveals ‘I belong to Jesus’ t-shirt 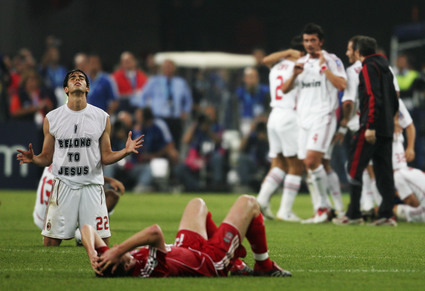 The defining image from the 2007 Champions League final, in which AC Milan beat Liverpool.
2 Scotland beat Franceâ€¦ in France!

One of the greatest wins in Scottish football history. And just look at Gordon McQueen’s brilliant, from-the-heart reaction to James McFadden’s wonder goal:

And yet McQueen’s reaction was still not quite as passionate as the commentator on Radio Clyde.
1 Lionel Messi’s Maradona goal vs Getafe
Not much that words can do here â€“Â the boy’s a bit special (shame that no English player could score such a goal). Just watch and enjoy Pies’ favourite football moment of 2007â€¦

And here’s how it compares with the 1986 original.
So that’s our favourite moments of the year. Any of your favs that didn’t make the list?