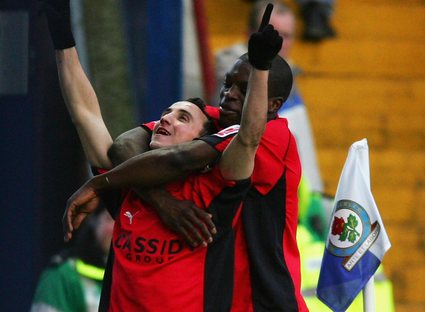 HEROES
Michael Mifsud The Coventry striker led the Sky Blues to an incredible 1-4 victory at Blackburn with two goals.
Gary McDonald His goal on the stroke of half-time proved to be Oldham’s winner against Everton.
Rocky Baptiste The car salesman kept non-league Havant and Waterlooville’s FA Cup dream alive with an 87th minute equaliser against Swansea.
VILLAINS
Brett Poate The Havant and Waterlooville player was sent-off for a two-footed lunge on Swansea’s Andrea Orlandi, sparking nasty scenes and almost sabotaging his side’s chances of progressing.
John Arne Riise His own goal against Luton kept the pressure on Rafa Benitez and forced Liverpool into a replay they could have done without.
Gary Megson Got his just deserts as his under-strength Bolton side crashed out against Sheffield United.