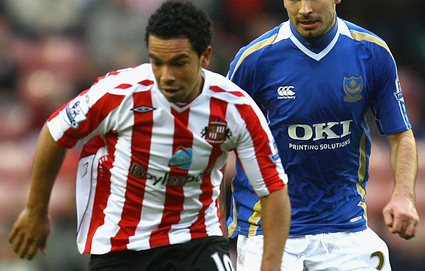 HEROES
Kieran Richardson The ex-Man Utd winger put in a classy display and scored a brace to earn Sunderland a priceless three points against Portsmouth.
Cristiano Ronaldo Showed no sympathy for Newcastle as he helped himself to a hat-trick in Man Utd’s 6-0 victory.
Antoine Sibierski The Wigan man scored from 25 yards with his first touch after coming on as an 81st minute sub against Derby.
VILLAINS
Alan Smith Sent-off against former club Manchester United for dissent while protesting about their controversial sixth goal.
Marcus Hahnemann His kamikaze antics against Aston Villa were exactly what Reading’s shaky defence didn’t need.
Arsenal’s attackers The Gunners had 16 shots compared to Birmingham’s two, but the teams shared the points in a 1-1 draw.