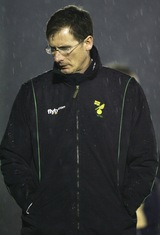 1. Have you ever seen Glenn Roeder smile? I mean really, really smile? The sort of sincere smile where your eyes go all twinkly. I can’t remember it ever happening. Not that Glenn had much to smile about, after his Norwich City side were knocked out by Bury last night, but still. Even thinking about him depresses me :(
2. 500 games in a Liverpool shirt for Jamie Carragher â€“ whatever you think of Mad Dog Carra, that’s some achievement for the ultimate one-club man.

3. For all Spurs fans who have been slagging off Younes Kaboul – give him a chance. He’s only young, so wait until next season before you judge him as a success or failure. He showed a glimpse of his great potential last night, in Tottenham’s 1-0 win at Reading.
4. What’s gone wrong for Reading since last season? They have the same players, but seem dreadfully flat, lacking in any spark. Even Steve Coppell seems a bit ‘oh, well, never mindâ€¦’ when his team loses.
5. Just 12,691 for West Brom’s replay against Charlton (which they won on penalties)? Come on Baggies fans, you can do better than that.