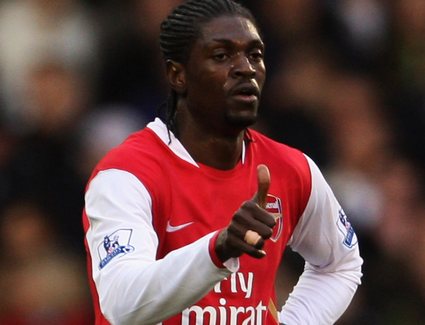 HEROES
Emmanuel Adebayor The Arsenal man was in sparkling form as he grabbed a brace to help defeat Fulham.
Benjani Mwaruwari His hat-trick gave Portsmouth a 3-1 win over Derby and must have had Harry Redknapp thanking his lucky stars that Zimbabwe didn’t qualify for the African Cup of Nations.
Robbie Keane Grabbed his 100th goal for Tottenham in their 2-0 win over Sunderland.
VILLAINS
Titus Bramble Yet another costly blunder from Bumbling Bramble. His scuffed backpass set Everton on the way to victory against Wigan.
Sebastian Larsson The Birmingham youngster missed an open goal against Chelsea with the scores at 0-0.
Kevin Keegan A 0-0 bore draw against Bolton. This is not the sort of entertainment the Geordie public expects. KEEGAN OUT… only kidding!