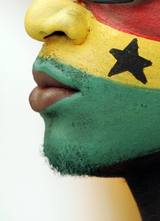 1. Germany can’t win it.
2. Argentina can’t win it.
3. Italy can’t win it.
4. Players feel free to shoot from everywhere on the pitch, probably because the standard of goalkeeping is slightly below that seen in the Women’s World Cup.
5. Moaning prats like Emmanuel Eboue, Didier Drogba and Obi-Wan Mikel have to leave England for a month.
6. Arsenal are forced to play with Swiss cloggers in central defence for a month (as a Spurs fan, that gives us some hope at least).
7. It’s gloriously unpredictable – you couldn’t say that of the World Cup, when the same old teams always reach the final.
8. Referees appear to tolerate a ferociously brutal standard of tackling – witness Benin’s assault on Mali; if that was a World Cup, Benin might have ended the game with seven men. As it was, they only had two players booked. Tremendous.
9. England can’t go out on penalties.
10. Did I mention that Germany, Argentina and Italy can’t win it?