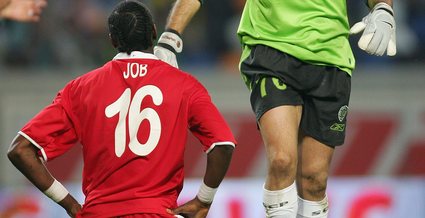 Pies puts together a team of players who sound like they could be implementing their income with a spot of moonlighting.
Stuart Taylor
Who wants to be in nets when you could be in the finest wool?
Chris Plummer
The perfect cure for a leaky defence.
Terry Butcher
Opposing strikers would be like a lamb to the slaughter.

Ben Thatcher
I don’t suppose a thatcher gets too much business these day. Oh well, diversification is the way forward.
Richard Carpenter
A midfielder boss who is hard as nails. Perfect.
Doctor Khumalo
The South African international can double-up as team physio.
Ian Bishop
On the wing (and a prayer).
Lee Cook
Adding some spice to the attack.
DJ Campbell
We don’t want to be known as a long ball team, but sometimes it is good to throw it into the mixer.
Alan Shearer
There is nothing sheepish about the former England skipper – except his name.
Joseph Desire Job
If the Cameroonian striker had been born in England his name would be Joe Dole Queue.