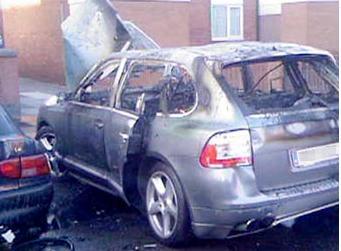 With the news that Manchester City players were the victims of a dressing room theft during their FA Cup defeat to Sheffield United, Pies looks at XI other footballers who have been the victims of crime.
Pepe Reina
The Spanish shot-stopper is one of several Liverpool players to have had their homes raided while on Champions League duty. Jewellery, a Bang and Olufsen entertainment system and his grey Porsche Cayenne (see above) were taken.
Rogerio
The Sporting Lisbon defender had his mother taken, which kind of puts Manchester City’s pocket money into perspective!
Andres Escobar
The Colombian defender was infamously shot dead after scoring the own goal that eliminated his country from the 1994 World Cup.

Roberto Carlos
The Brazil defender was robbed at gunpoint live on radio while giving an interview as he was stuck in traffic in Belo Horizonte.
Patrick Vieira
The former Arsenal midfielder and his wife were gassed through the air conditioning system in their villa near Cannes by thieves who then stole jewellery and a Mercedes 4×4.
Steven Gerrard
Another representative of, and the most recent member to join, the Liverpool Champions League Away Day Burglary Club. The raiders confronted Gerrard’s wife, Alex Curran, and stole items of jewellery.
Sean Rigg
The Bristol Rovers players had his jaw broken by Barrow defender James Cotterrill during an FA Cup tie. Cotterrill was sentenced to four months in jail.
Chris Byrne
The then Macclesfield Town player was shot in the street near to his parents’ home in Hulme, Manchester, in 2002. The attempted robbery left Byrne with a severed artery in his leg.
Mamady Sidibe
The Stoke forward was beaten up and stabbed by rampaging Togo fans after inflicting defeat upon them with his native Mali.
Duncan Ferguson
Duncan Disorderly had the law on his side for once when he apprehended two burglars at his house in 2001. The one Dunc got his hands on spent three days in hospital.
Obafemi Martins
The Newcastle striker claimed he had been shot at by masked gunmen while in his native Nigeria.