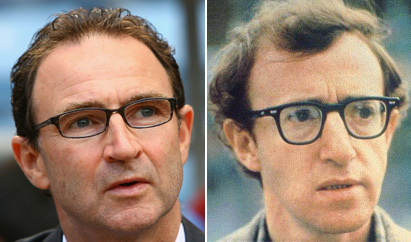 Mark Hughes – Electrician
What better job for Sparky?
Gary Megson – Beautician
Relishes taking a rough and rugged Trotter and trying to make it more attractive to look at.
Avram Grant – Astrologer
He can follow Uncle Russell into the trade.
Paul Jewell – Captain of the Titanic
Building up a strong CV of maintaining a calm exterior despite the inevitability of going down.
David Moyes – Bartender 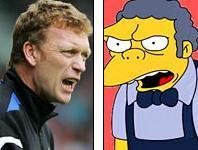 Roy Hodgson – Bus conductor
No particular reason for this other than he looks and sounds like a bus conductor.
Rafa Benitez – American football coach
Rafa will be salivating at the thought of all the rotating, even in one match!
Sven Goran Eriksson – Kiss-and-tell girl
He has made the tabloids often enough so he might as well make a bit of money out of it.
Sir Alex Ferguson – Scotch taster
The more purple the nose, the better the whisky.
Gareth Southgate – Middlesbrough chairman
It is a natural progression: player, captain, manager, chairman.
Kevin Keegan – Cosmetics salesman

Harry Redknapp – Second hand car dealer
What else for this wheeler dealer? Get yourself down to ‘onest ‘arry’s and he’ll fix you up with a motor.
Steve Coppell – Insomnia cure
“Hello and welcome to Steve Coppell’s Good Night’s Sleep…” Zzzzzzz.
Roy Keane – Manchester United reserve team manager
Already has a wealth of experience in working with Man Yoo’s fringe players.
Juande Ramos – Personal trainer
He did it to Tom Huddlestone, and now he could do it to you. Get into shape with Juande.
Steve Bruce – Cosmetic surgery ‘before shot’ model
“Is your nose so badly misshapen that it is practically folded in two on top of itself? Here at Latics Cosmetic Surgery we can change that…”
Alan Curbishley – Tom Jones impersonator
Spent his formative years in The Valley before moving to London.