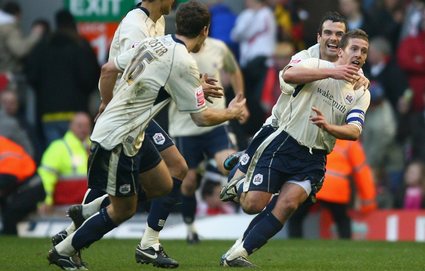 HEROES
Brian Howard The Barnsley skipper’s late winner gave his side a shock 1-2 win against Liverpool at Anfield (in case you hadn’t heard).
Luke Steele The Barnsley keeper also makes the cut for his string of match-winning save against Liverpool.
Wayne Rooney Was absolutely immense as Man Yoo outclassed Arsenal.
VILLAINS
Emmanuel Eboue Not Pies’ favourite character at the best of times, but at 3-0 down to Man Yoo his mid-air lunge at Patrice Evra four minutes after half-time was the last thing Arsenal needed.
Andy Marshall The Coventry keeper made a howler as he passed the ball to West Brom’s Roman Bednar to give them a second goal on the way to a 0-5 rout. Darren Carter Scored a late own goal against Portsmouth to eliminate his Preston side from the cup.