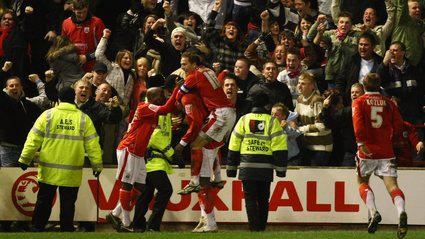 HEROES
Kayode Odejayi Oh, you thought he might be here, did you? Odejayi rose to head home Barnsley’s winner against Chelsea.
Peter Whittingham Scored one, made one and played a blinder as Cardiff knocked Middlesbrough out.
Ishmael Miller Helped himself to a hat-trick as West Brom overpowered Bristol Rovers to complete the semi-final line-up.
VILLAINS
Arsenal Missed chances against Wigan which means Manchester United can go top when they play their game in hand.
Luis Boa Morte With West Ham already 2-0 down against Tottenham, Boa Morte stupidly got himself sent-off before half-time.
Jose Enrique Kicked the ball against Jermaine Pennant to give Liverpool a bizarre opener which typified Newcastle’s defending.