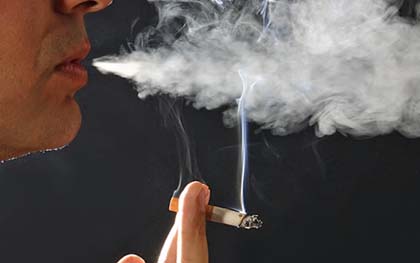 It’s not a pastime you might expect from a professional athlete but there have always been a few footballers who just couldn’t say no to the terrible weed.
Jack and Bobby Charlton puffed their way to a World Cup and probably celebrated with a pint and a roll-up. Times have changed but there are still a few sporting heroes who haven’t managed to keep their Nicotine cravings at bay – and their not necessarily the pasty faced, yellow fingered, ash tray breathed ones you might think of…
1. Zinedine Zidane
Despite fronting an anti-smoking campaign in 2002, the headstrong Frenchman was seen savouring a Gauliose just before the 2006 World Cup semi-final against Portugal. Was his eventual sending off in the final just an excuse to get down the shops for a packet of ten?

2. Maradona
Slightly less surprising since Maradona has more vices than an industrial workshop. He’s said to have chain smoked throughout most of his career and, on a good day, even stuck to tobacco.
3. Johan Cruyff
The Dutch have pretty liberal views but even they are surprised that their greatest ever player was a 20-a-day addict during his heyday. A double heart bypass was enough to convince him to quit and he’s now turned to chain-sucking lollipops instead – could be what you call a Kojak moment.
4. Paul Gascoigne
Another addictive personality who used everything from drugs and alcohol to cigarettes in an effort to escape his inner demons, although Gazza eventually lost the chase after being sectioned under the Mental Health Act earlier this year.
5. Teddy Sherigham
He’s old enough to know better but at least the toll on his health hasn’t made any difference to his pace, since he never had any in the first place. Teddy was seen smoking, drinking and chatting up a blonde in a Portuguese bar just before the 1998 World Cup – Hoddle was also said to be fuming!
6. Gianlucca Vialli
Vialli’s smoking is more of a cultural habit since quite a few Italian managers enjoy a toke or two including Ancelotti, Lippi and Trappatoni. We remember him smoking on the Chelsea sidelines when Ruud Gullit left him out but he was less public about it after he became manager – either that or he couldn’t get served in his schoolboy clobber!
7. David Ginola
The difference between him and the others is that he made it look cool ina suave, sophisticated French sort of way – although George Graham might disagree.
8. David James
It’s hard to believe that the oldest serving player in the Premier League was once on a pack a day – and it was only when he moved to Liverpool and had to do long distance training that his addiction was exposed. He’s quit now, which gives him more time to talk bollocks to anyone who will listen.
9. Frank Lebeouf
Maybe it’s the bright lights of the ‘Big Smoke’ in London that have tempted so many of these players to turn to the tabs. The former Chelsea defender seems to have paid the highest price for his addiction on the pitch – or maybe he was just crap anyway.
10. Cesar Luis Menotti
As mentioned, there have been a few managers who have been spotted lighting up but none so furiously as Argentina’s World Cup winning coach, Cesar Luis Menotti, whose touchline chain smoking was one of the abiding memories of the 1978 tournament – first one’s free Diego!
Let us know of any other footballers whose life is a drag.