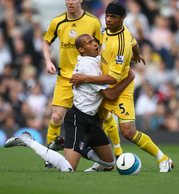 There has been plenty of contenders (most of them last seen trying to distinguish between their backside and the funny bone in the vicinity of Pride Park) but we have whittled down the Premier League’s poor performers to bring you a team so bad that even Roy Hodgson would think twice before sending it out on a Saturday afternoon. After the jump…

1. Paul Robinson
Derby’s Stephen Bywater might have picked the ball out of his net a few times, but Robinson’s lack of form this season has been astounding. Dropped by Spurs and England after a series of blunders, Robbon will be glad to see the back of this season.
2. Chris Baird
Voted the worst player in the league by Ollie as early as October last year after impressing our Editor with his lack of ability to pass a ball or tackle an opponent. That’s Â£3 million Fulham will never see again.
3. Dean Leacock
Just a terrible, terrible defender in a terrible, terrible team. We are sneaking him in at left-back because his positional play at centre-back is so poor that you can’t tell where he is playing most of the time anyway.
4. Titus Bramble
Did the change of scenery help Bumbling Titus regain his concentration? Not a jot. He has been just as accident prone at Wigan as he was at Newcastle and has weighed in with a couple of particularly high-profile blunders.
5. Darren Moore
Like Dean Leacock’s older, fatter, less mobile and bandana-less brother. The pair formed a central defensive partnership of Bramble-Boumsong magnitude.
6. Steve Sidwell
Has moved to the Worst Players XI on a free transfer after making a big name for himself in the Most Useless Signings XI. Bit part would be an exaggeration. Sidwell has looked out of his depth at Chelsea. Expect another move this summer.
7. Seol Ki-Hyeon
Another of Lawrie Sanchez’s inspired Summer ’07 signings. At Reading he was frequently anonymous but at least weighed in with a few goals. At Fulham he has just been hopeless.
8. Joey Barton
Getting injured in pre-season and then getting remanded in custody while under arrest for assault, and then having to spend time in the Sporting Chance clinic hardly constitutes a good signing or a successful season.
9. Rolando Bianchi
Thankfully for Sven Goran Eriksson, his Â£8.8 million Italian flop had been ushered out of Eastlands before the wheels came off on Manchester City’s season.
10. Steve Howard
Rarely has a Premier League striker looked so conspicuously like a big bulking Championship targetman dangerously out of depth as Steve Howard has this season. He did manage a goal against Man Yoo but it was his solitary Premier League goal. He was shipped back to his natural Championship habitat in January with Leicester taking the Â£1.25 million bait. That meant a 250,000 profit for Derby…
11. Freddie Ljungberg
Remember world-beating Freddie Ljungberg of a few years back? It turns out a move to Upton Park was not what the Swede needed to rejuvenate his career after all. Has been a big disappointment for the Hammers?
Who would be in your team?