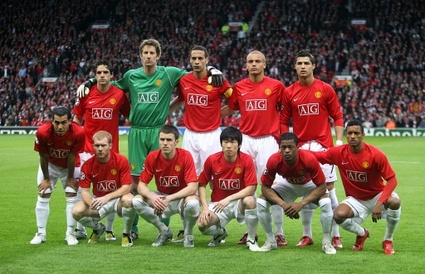 MAN UTD
Edwin van der Sar Safe hands overall, despite one spill and a couple of sliced kicks. Took a couple of knocks for his trouble, from team-mate Wes Brown. In truth, Barcelona, never really tested him. 7
Owen Hargreaves Robot-like stamina saw him patrol the right-hand line with admirable discipline. Unsure of his positioning once or twice, but never looked uncomfortable at right-back. 8
Wes Brown His best ever performance in a United shirt. Nemanja Vidic was not missed at all. Cleared everything that came his way. 9 MAN OF THE MATCH
Rio Ferdinand Some brilliantly timed clearances, both with his head and foot. Looks more like a leader each time he plays, although on this occasion Brown outshone him. 8

Patrice Evra Keeping tabs on Lionel Messi is a tough task, but Evra did well. His athleticism never fails to amaze. 8
Michael Carrick You always feel the need to shout “Man on!” when Carrick receives the ball, but his intelligent range of passing usually gets him out of trouble. A decent, unselfish performance, but he might have got more involved. 7
Paul Scholes Perhaps the notion that he was past it stung Scholes into action. This was a much better showing than he gave in the Camp Nou, capped by a typically pure strike. How much is left in his little legs though? 8
Park Ji-Sung A great improvement on his first-leg stint, and one of his best outings in a red shirt. He worked tirelessly to close down the opposition and generally used the ball well. His crossing was often dangerous too. 8
Nani A whole-hearted game from a player who has yet to settle fully in England. Gave the ball away too often, but ran like a dog to get it back. Could have scored with a header but his effort glanced wide. 6
Cristiano Ronaldo Again overshadowed by Lionel Messi, the Portuguese was often one of United’s least convincing outfield players. He ran hard for his team when he wanted to, but complained to anyone who would listen – team-mates, the referee, Jesus – and went to ground too often. To be fair to him, he’s probably running on empty at the moment. 6
Carlos Tevez Did for United what Dirk Kuyt does for Liverpool, i.e. ran his socks off for the team, and then some – although Tevez has more to his game than Kuyt. His all-action performance ensured that Wayne Rooney was not missed too much. 8
BARCELONA
Valdes Could not have stopped Scholes’ goal. Didn’t have that much to do other than pick the ball out of his net. Still not convincing though. 6
Zambrotta His slack ball led to the goal. Nothing he did came off. Booked. 4
Puyol Lots of blood and thunder, but he is not a world-class player, that much is clear. 6
Milito Fouled anything that moved. Fully committed, but played like a headless chicken at times. 5
Abidal His athletic qualities get him out of trouble, when his suspect footballing qualities let him down. Not good enough for a club like Barcelona. 5
Xavi Enjoyed lots of possession, but didn’t use it well enough. 6
Toure Yaya One of the few Barca players to emerge with any credit over the two legs. Always seemed to be in the right place to thwart United’s attacks through the middle. 7
Deco Never got into the game, apart from one opportunistic strike that whistled past United’s right post. Barca’s least effective midfielder. 5
Messi United supporters will be glad to see the back of him – he looked dangerous every time he received the ball. The way he skips past players, with the ball seemingly stuck to his toe, is a marvel. 8
Eto’o Says he might leave Barca to win trophies elsewhere. On this mediocre showing, who would take him? 5
Iniesta Shouldn’t have been taken off. He was one of Barca’s most threatening players – that’s not saying much. 7