Pies puts together 11 players from the relegated Premier League clubs who still deserve to be playing top flight football (Derby players are conspicuous in their absence…). 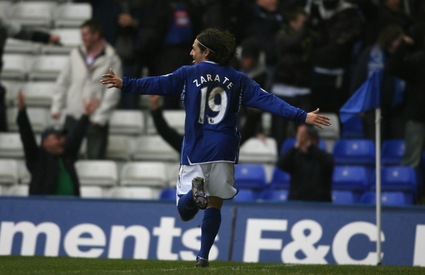 Maik Taylor
The veteran Birmingham keeper has been in decent form for club and country this season.
Stephen Kelly
Birmingham’s Mr Consistent played every minute of every match this season. That sort of fitness and commitment deserves Premier League football.
Graeme Murty
Reading’s skipper is always a consistent performer. But at 33 and having signed a contract with the Royals until 2009, he might have kicked his last Premier League football.

Radhi Jaidi
Deserves to stay around for his goalkeeper distracting antics alone, but also a decent centre-back who will grab the odd goal or two.
Sebastian Larsson
One of Birmingham’s best players, a constant danger with a dead ball and has weighed in with his share of goals.
Giles Barnes
Had his season blighted by injury, but when he did make it onto the pitch he was Derby County’s best player (hence the constant rumours of a move to a bigger club).
James Harper
The ex-Arsenal man has that extra bit of quality that is missing among some of his Reading team-mates, as indicated by his stunning goal yesterday.
Olivier Kapo
It is always difficult to impress in a struggling team, but Kapo has showed moments of magic this season. He might be in the Premier League again next season as Spurs mull over a Â£6 million move.
James McFadden
Rejuvenated Birmingham when he joined from Everton but couldn’t do enough to keep them up.
Dave Kitson
The Reading striker was being carefully monitored by Fabio Capello after bagging ten Premier League goals, but FabCap is unlikely to be trawling round Championship grounds to keep tabs on him.
Mauro Zarate
The young Argentinian showed he definitely has Premier League class as he grabbed four goals in 14 on-loan games which nearly saved the Blues.