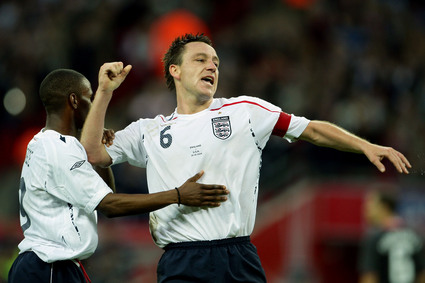 1. It was a decent performance against a poor side – nothing more and nothing less. Did we learn anything? Not really.
2. In the words of Mark Lawrenson: “England don’t do friendlies. Some would argue they don’t do competitions either, but they definitely don’t do friendlies.”
3. International friendlies are disjointed enough at the best of times. The whistle-happy Greek referee did not help matters.

4. England’s one touch football is much improved. Not only did it lead to the second goal, but it also helped them out of difficult situations.
5. Did John Terry well up a little bit after scoring his goal before burying his face in the nearest shoulder? Methinks so.
6. Steven Gerrard is a definite option for the left-side. He was by far the best player on the pitch last night.
7. David Beckham can henceforth be known as Goldencaps.
8. Oguchi Onyewu has a lovely name. So spake John Motson.
9. Motty and Lawro need splitting up immediately. Their commentary is a constant battle to get to the punchline. If one says anything remotely worthwhile the other ignores him.
10. Fabio Capello is on the right tracks. He just ought to stick to Italian for a bit longer!