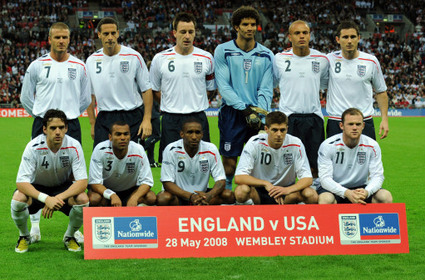 David James A spectator for most of the match. Made one save of note, keeping out a weak Freddy Adu shot. 7
Wes Brown Usually appears less confident for England than his club, and this was no exception. Fine at the back, less so going forward. 5
Rio Ferdinand Perfectly assured, never looked in trouble. 8
John Terry If Terry can take this form into the World Cup qualifiers, then England will concede few goals. The grieving Chelsea captain did little wrong; his fine headed goal will go some way to easing the pain of that missed penalty. 8
Ashley Cole Energetic, dynamic, disciplined – much more like the Cole of old. 7

David Beckham Set-up the opening goal, but I’d love to see a new England that doesn’t always look to his deadly boot. Beck’s presence dictates – and restricts – the way England play. 6
Owen Hargreaves Destructive and constructive in equal measure, he was the game’s most conspicuous player, and must now be a first-choice in Capello’s midfield. 8
Frank Lampard Gave a sloppy, lacklustre performance, which should finally put an end to his days as an automatic first-choice for his country. As Chris Waddle pointed out on Radio Five Live, Steven Gerrard lacks confidence to roam when Lampard is alongside him – Stevie G just doesn’t trust Lampard to do his duties. 5
Steven Gerrard On this evidence, the Gerrard or Lampard debate is a farce: of course Gerrard is the more valuable player. Linked up brilliantly with Gareth Barry for the second goal, and generally seemed much more threatening/confident once Barry had replaced the ineffective Lampard: Rafa, take note. 8
Wayne Rooney It says little for Roo’s intelligence that he seems incapable of taking managerial orders. Stop running around looking for the ball!! And stop losing your temper for absolutely no reason – in a proper match, he might have been sent off for a couple of heavy tackles. A frustrating performance to watch. 5
Jermain Defoe Should have got on the score sheet, having got into several good positions. Probably did enough to satisfy his manager – he didn’t get much service to feet, or assistance from Rooney. 6
Subs
David Bentley Improved as the second half wore on, with a couple of decent crosses from the right, but overall he didn’t have a big impact on the game. 6
Gareth Barry Set up Gerrard with his first touch, a lovely cushioned through ball. Gave balance to England’s midfield – looks every inch an international player, and seems set to become a firm Capello favourite. Will captain England against Trinidad on Saturday. 7
Glen Johnson Sound enough, and looks better going forward then Wes Brown. 6
Peter Crouch The usual array of neat touches, although not that many of them led to dangerous attacks. 6
Joe Cole & Wayne Bridge No time to make an impact.
Manager
Fabio Capello Proved his worth at half-time, when he obviously told his players to relax, keep hold of the ball and show a little patience. His first team seems to be coming together, although he still lacks for a world-class striker to partner Wayne Rooney up front – at least until Michael Owen gets back to full fitness – if that ever happens.