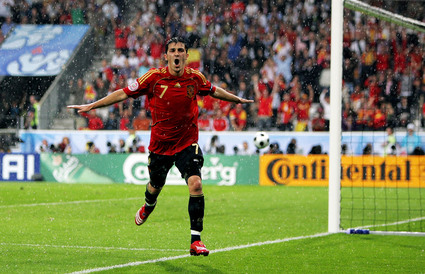 1. The emphatic victory was a great signal of intent from Spain. It was also a superb hat-trick from David Villa.
2. Spain’s very own Lampard-Gerrard conundrum is solved: Torres and Villa can play together (sometimes a little too literally).
3. I didn’t see Christian Panucci lurking behind the goal, so I think I can safely say that Cesc Fabregas was offside when he scored his first goal for Spain.

4. The match started as an exciting tournament match, became a friendly at half-time and descended into a kickabout in the park after about 60 minutes.
5. This was shades of Ukraine two years ago. Four goals and an exciting performance against a former Soviet outfit in the opening match and we all hail Spain as the future winners. Will there be a different outcome this time?
Sponsored message from our partners Betclick.
Tonight’s betting: Portugal to the Czech Republic 3-0. Bet Â£10 win Â£150- all the match odds here
Free Â£10 bet for new members at BetClick. Pies special offer click here.