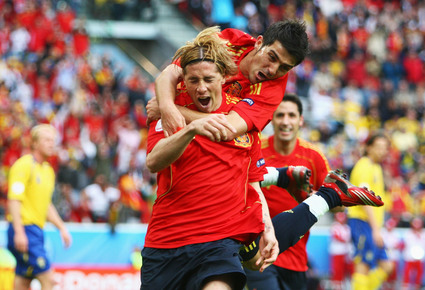 1. Just when you thought it was beginning more like the Spain we know and love – underachievement and failing to live up to potential – David ‘Luxury’ Villa steps up to win the match. Undeserved, but Spain are through.
2. Nice little finish from Fernando Torres too for the opener as he converted David Silva’s clipped cross.
3. The Spaniards also look a little fragile at the back. It was slack defending to allow Zlatan Ibrahimovich to score the equaliser. Carlos Puyol was not looking his best even without his injury, Marchena doesn’t convince me, and Sergio Ramos was at fault for the goal.

4. The second half was really bland. There was a nice tempo to the opening period, but after the break there was probably more goalmouth action on Doctor Who over on the BBC.
5. Sweden are like shopping in a charity shop. There’s a lot of really old items (some are falling to pieces). There’s also a lot of crap, but there’s also enough quality to put together a decent outfit. There’s nothing special about them, which makes you realise England really ought to be in the tournament.