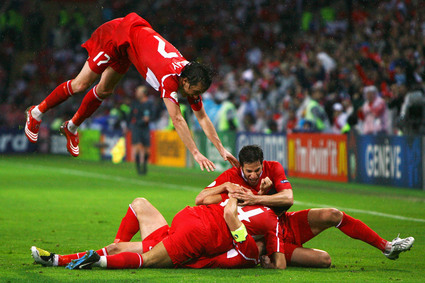 1. That was a crazy, enthralling game of football. The match had absolutely everything.
2. Petr Cech mistakes must be like train derailments – they don’t happen too often, but when they do there is big repercussions.
3. Nihat’s finish to win the match was absolutely superb. Clipped over Cech. In off the the bar. Unstoppable.

4. I cannot believe that having got themselves into the lead from two goals down, Turkish goalkeeper Volkan decided to push Jan Koller over. Why take the risk of getting yourself sent-off when you are in the lead? Also, since the red card offence took place in the box did it not merit a penalty?
5. Referee Peter Frojdfeldt really annoys me. You just know that he realises when he pulls a player to the side for a ticking off there is probably a close-up of him on TV. That is why he does it so often. But why does he do it with a smile on his face? The Smiling Fusspot. If you’re going to stop the game every 30 seconds because a defender has breathed too heavily on an attacker, at least have the decency to put on a stern face.